Whereas most of you know that my happy place is the beach, this weekend Bill and I were able to experience and enjoy his happy place – his daughter’s second home in Cavendish, Vermont, a sleepy village that has become even more sleepy due to the coronavirus.

Since we have only been working at Atlantic Oaks Campground on a part-time basis due to the restrictions of the pandemic, on Thursday we spontaneously decided to take off for Vermont for a few days. Within an hour, we packed our bags, grabbed food and liquor (of course!), and jumped in the car for a four-hour drive.

Feeling a tad guilty when we reached the New Hampshire/Vermont border and saw a sign requiring those entering the state to quarantine for 14 days, we soon discovered that Vermont has actually reopened to a further extent than any state we have traveled through recently. We had come prepared with our masks and sanitizer and were merely looking for some different scenery within which to self-isolate. In the same way that my blood pressure immediately drops when sitting on the beach, Bill, even after driving for multiple hours, was quickly able to relax, find a chair on the porch, and garner peace from his surroundings.

After a good night’s sleep, we were anxious to delve into the day. It was beautiful and actually quite warm as we headed to our first hike, Buttermilk Falls. This was a very easy walk, if you will, but the end result was beautiful – three amazing waterfalls! Sometimes pictures speak louder than words. 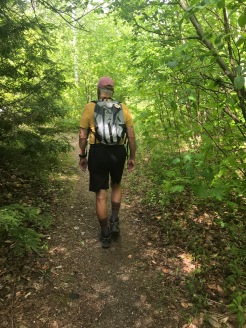 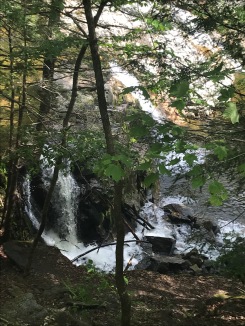 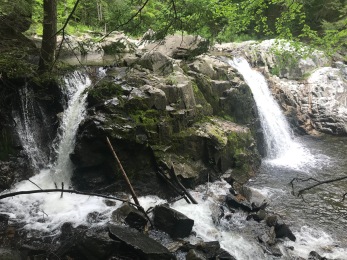 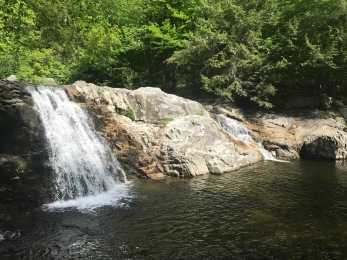 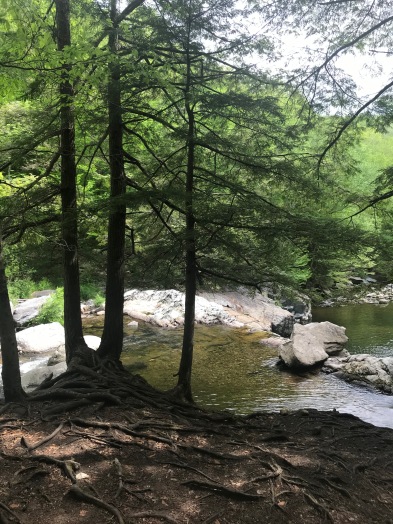 From the falls we rode further north to hike the White Rocks/Ice Beds Trail. This trail was categorized as “moderate;” however, it was the toughest “moderate” hike we’ve ever tackled! Of course we compare every trail we hike to our experience hiking the fifty miles of the Appalachian Trail in Maryland two years ago, but honestly, this hike was rocky and steep and not real well blazed! The elevation differential was over 550 feet but the view from the vista at the summit was worth every step. Look at that view – check out those white rocks! We encountered no other hikers until we arrived at the top, where we met a local hiker who told us she comes up to this lookout quite often. She asked if we were going to attempt to climb the rocks, to which we replied, “Not today,” especially after she shared that she had done it once but had been so freaked out by the multitude of bats living in the rocks that she would never do it again! 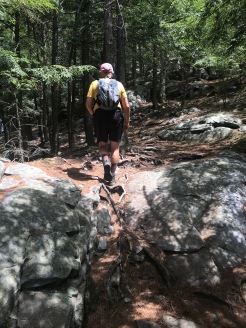 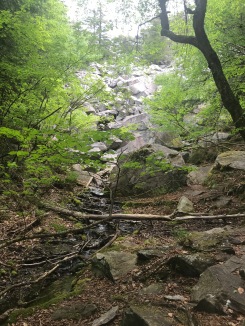 From the summit we continued down – which I always find more difficult than climbing up – and we made our way to the Ice Beds, where glaciers during the last Ice Age had exposed the White Rock Cliffs. During the winter, ice forms in the recesses of the rock pile at the end of the trail, and it doesn’t melt until way into summer. As a result, all summer long, a draft of cool air and a stream of 40-degree water flow down from the rock pile. It was really cool (no pun intended) to feel the temperature change within just a few steps and by that point in the trek we found it most refreshing! We made our way back to the trailhead with just one small deviation, and we were confident we had reached our fitness goal for the day!! Oh, and on our way home we had to stop to investigate a really, really old cemetery, with headstones dating back to the early 1800’s! 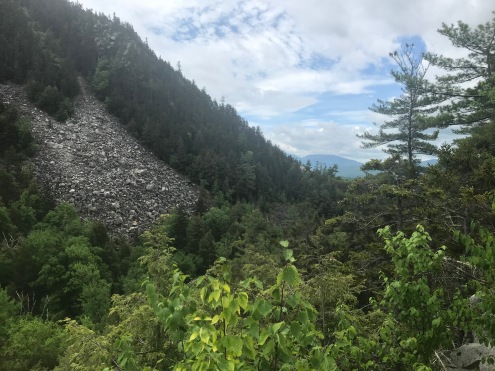 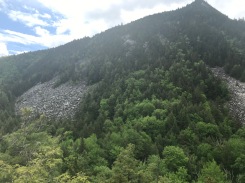 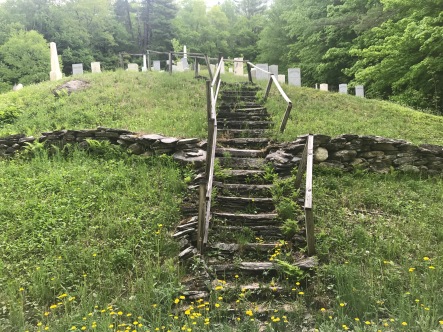 About an hour drive north of Cavendish, Vermont, is a quaint little town called Brandon. On Saturday, we took a beautiful drive through the Green Mountain National Forest to Brandon to say hello to a couple, Janet and Joel – and Horace, their dog, who worked with us last summer in Cape Cod. Even when working with us, they maintained an Ebay antique business, and this summer decided to return to their hometown to open a pop-up antique store. It was great to see them and imagine my delight to find all the stores on Main Street open and operating, including outside dining at restaurants! Janet and Joel were obviously in their element as townspeople passed and shouted hello, and almost everyone who entered the store knew them. Most people were wearing masks which I was glad to see, but they certainly didn’t affect the communication. What a wonderful town! We took a walk with Joel and Horace as Joel gave us the history and pointed out beautiful natural sites and some interesting characters along the way – like the local barber, now in a wheelchair, who had cut hair for 60 years! 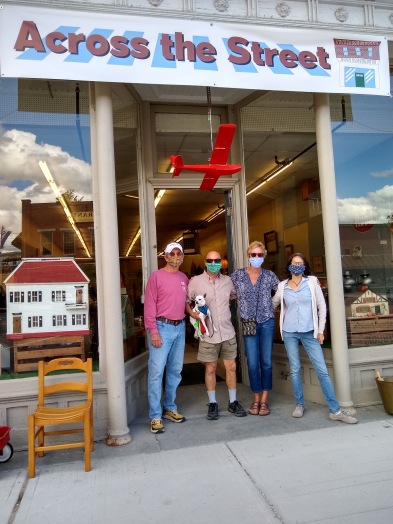 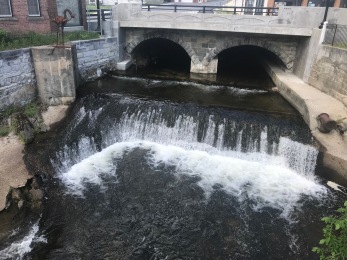 After spending quality time with our friends – one of the most wonderful things about the life Bill and I live being the number of people we meet who truly do become lifelong friends – we bid “adios” and on the way out of town look what we ran into – literally – a covered bridge! How many of these do you still see? 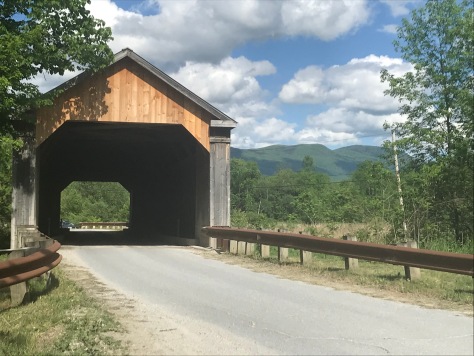 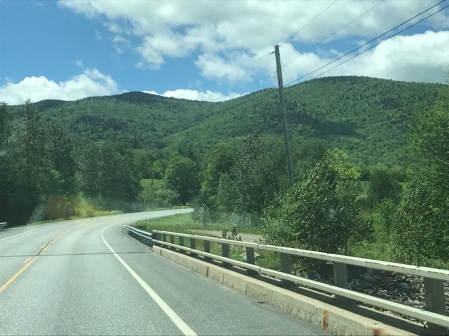 We returned to Cavendish via a different beautiful route and noticed patio diners at Murdock’s, a local restaurant. If you know me or follow my blog, you know that Bill and I really enjoy dining out and we have not been able to do that since early March. I can’t tell you how very nice it was to sit outside and share a meal, including a delectable bottle of wine from Paso Robles called “Rabble.” All the more delightful was the fact that I did not have to cook the meal or do the dishes! Again, everyone was masked and gloved, the disposable menus became our placemats and there were only 5 tables on the porch, totally spaced apart. It sounds crazy but I can’t tell you how lovely the whole experience was – it’ll keep me going for a while until things open further in Massachusetts! 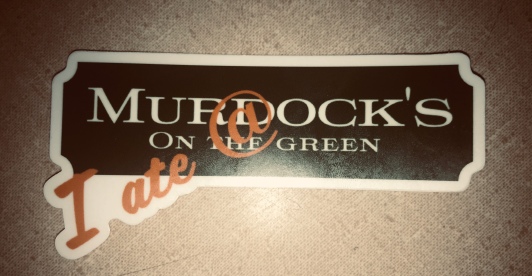 Late Sunday morning I had to peel Bill away from his happy place, but hopefully the peace, serenity and inner energy he found while in Vermont will carry him through until we return to his daughter’s home, affectionately known as the Schreckendish House! Be sure to find – and frequent – your happy place!