Bill wore his cowboy boots; I wore flip flops. We walked through the rodeo parking lot filled with more pick-up trucks than this beach girl has ever seen and entered the arena to a sea of cowboy hats, clothing, boots and belt buckles! After spotting one – and only one – other sandal-clad women, I came to the realization that perhaps I didn’t quite fit in with the cowboy/cowgirl culture…but I sure was enjoying myself!

So, there we sat, four rows from the top of the arena and spent two and a half hours watching the rodeo events! The nightly rodeo began with a grand entry of San Antonio’s “Palomino Patrol,” a pack of palomino horses outfitted with magnificently ornate silver saddles that the riders spend hours polishing before each performance. Following this patriotic display and the singing of our national anthem, the rodeo went into overdrive!

With absolutely no time wasted, we watched bareback bronc riding where the cowboys look like rag dolls as they struggle to hold on for dear life, followed by my personal favorite – mutton busting! Can you imagine putting helmeted kids – ages 3 to 6 – on the back of a sheep, which is then released from a chute! Most of the contestants we witnessed fell off almost immediately except for one little guy who let that sheep take him on quite the ride. He was declared the winner and when interviewed responded only with a nod of his head! All I could think of was my two grandchildren in that event – NOT! 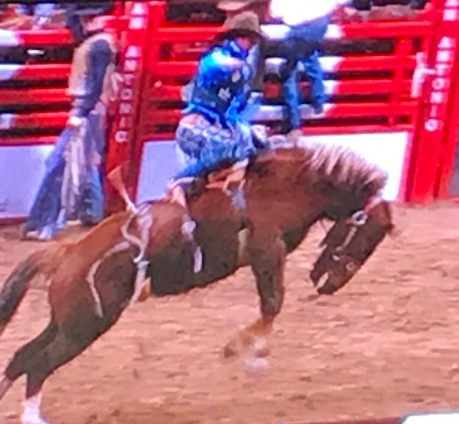 In addition to the bareback, there was also saddle bronc riding, team roping, steer wrestling, calf roping and barrel racing, which was the only event for women. Friday night was the semi-finals, so as you can imagine, the stakes were high and the atmosphere full of energy. The final event of the evening was the bull riding, which I find the most exciting. Can a cowboy randomly select a bull and then ride that creature for 8 seconds without being thrown? Well, we had heard people talk about the quality of the bulls this year, which was proven true, as only one rider out of ten in the competition was successful in riding the bull for a full 8 seconds! Only in bull riding does a mere 8 seconds seem like an eternity.

On most nights during the 18-day San Antonio Stock Show and Rodeo, the rodeo events are followed by a concert. Most of the entertainers are country performers such as Brad Paisley, Alan Jackson, Chris Young, and Rascal Flatts, but on Friday night we stayed to hear Foreigner – talk about a blast from the past! Not that I was ever a real fan, but who wouldn’t remember songs like Double Vision, I Want to Know What Love Is, Dirty White Boys and Jukebox Hero?!

Part of the reason Bill and I do what we do, is to experience life outside our own, and believe me the rodeo was one such experience! Maybe I’ll be a true cowgirl in my next life!

This morning, we rallied early and attended the last scheduled Cowboy Church in the Auction Barn on the rodeo grounds. Tommy Brandt and his son Tommy Brandt II played traditional hymns with a country flair. Young Tommy played the electric guitar and as his dad said, “He’s the Lynyrd Skynyrd to my George Strait.” Tommy Brandt then preached a very meaningful message about faith and our relationship with God, which he came to understand at a very difficult time in his life – when he was, as he put it, “a country song waiting to be written!” All in all, it was a wonderful morning and a tremendous rodeo experience – flips and all, y’all!