“Hunnah” is the Gullah word for “Hello” and “Look Ya” in the African-Creole dialect means “Look Here!” That is exactly what we did this past Friday when Bill and I, along with his daughter, Sarah, and her pup, Sunny, visited the Gullah Museum in Georgetown, South Carolina, about a 30-minute drive from our home in Murrells Inlet. 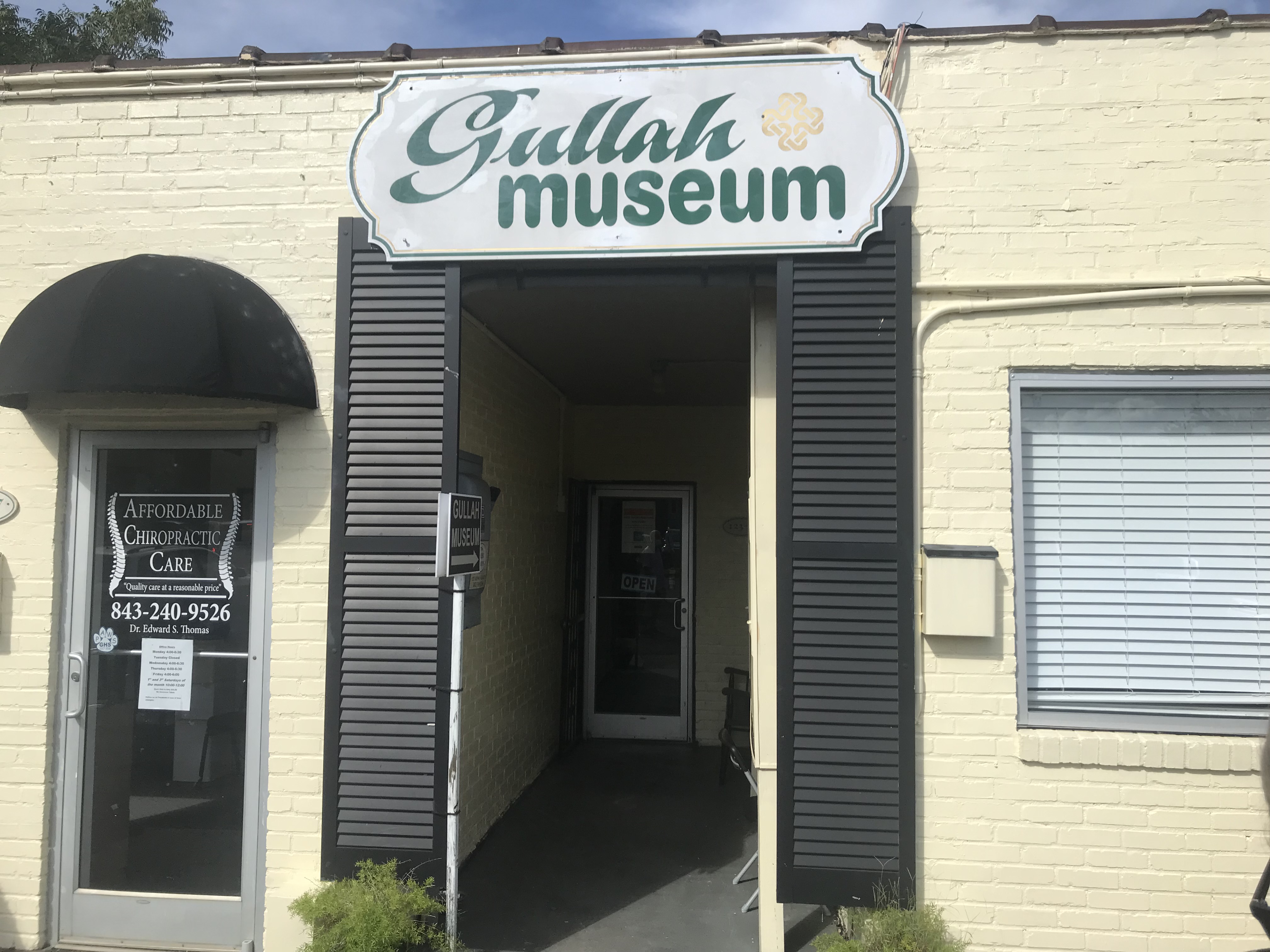 After walking the Harborwalk in Georgetown, and stopping in several of the shops along Main Street, we arrived at the one-room Gullah Museum around 2 p.m. We were greeted by Mr. Andrew Rodrigues, proud curator of the museum, alone now since his wife Bunny’s death in 2015.

Following a view of beautiful sweetgrass baskets, quilts, artifacts, and information about rice, cotton, and indigo, we settled in as Mr. Rodrigues – fueled by multiple Mountain Dews – spent two hours relating stories by using a quilt his wife had created, as a story board. 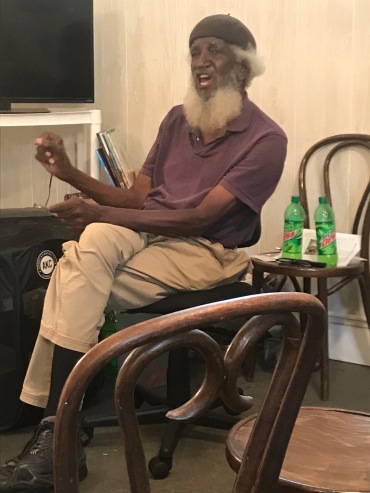 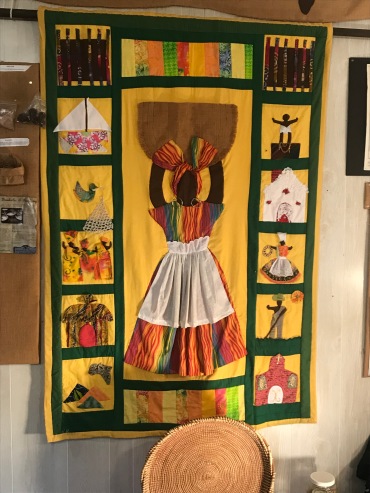 We learned about the black pharaohs who designed and constructed the pyramids in Egypt, the slave ships that made transatlantic journeys, the discovery of rice and its production along the coast of South Carolina and Georgia… and did you know that the black militia men in the Civil War were referred to as “Buffalo Soldiers” because their hair was similar to that of a buffalo…or that the slaves, usually young boys, who tended the cattle were the first ones known as “Cow Boys?” 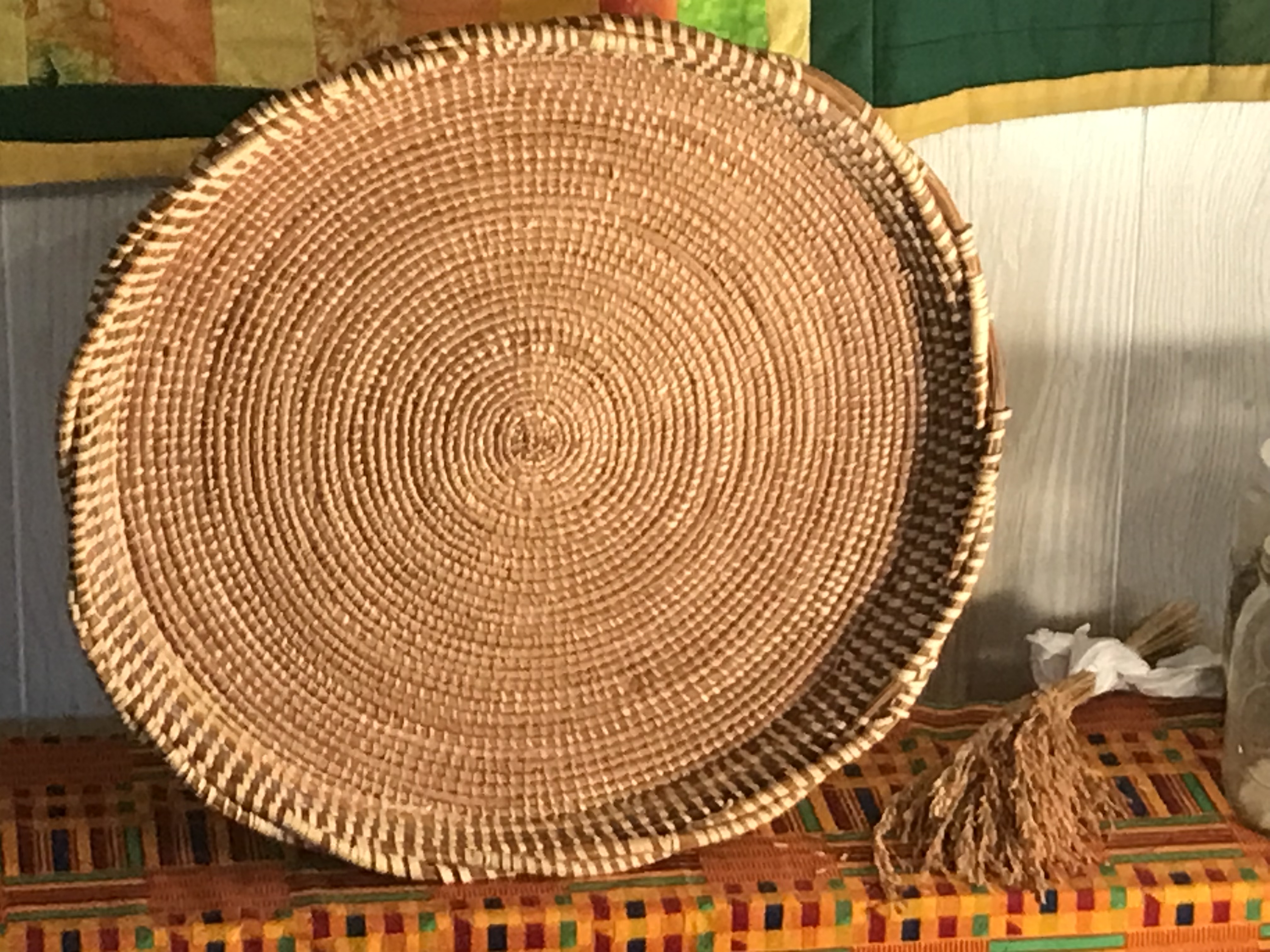 This is just the tip of the iceberg with regard to the stories we heard, and although our raconteur was somewhat convoluted at times and tended to digress occasionally, it was two hours well spent!

Also of particular interest and beauty was a quilt, again created by our curator’s wife before her death, that depicted the life of Michelle Obama and her connection to the Gullah culture through her grandfather. This specific quilt was also showcased at two Presidential inaugurations!

The Gullah culture is intriguing to me and I was anxious to learn more about it. The culture is truly alive and well in the Lowcountry as evidenced by roadside sweetgrass basket stands, families that still speak the language, and the communities of Gullah folk that still live on various islands off the coast of South Carolina. Did you know that “Kumbaya” is a Gullah word meaning “come by here” and that every time you use the words “yo,” “tote,” “okra,” “yam,” or “goober,” you are speaking Gullah? 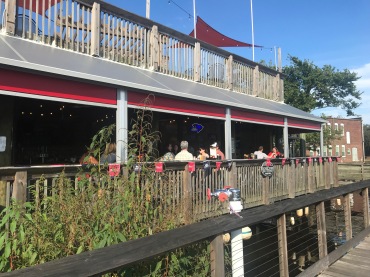 Following our educational afternoon, we needed a cocktail, so we completed our Georgetown adventure at Buzz’s Roost for an early dinner. As we continued on the Harborwalk toward the car, a local gator bid us farewell, and then as we left town, who should we pass but Mr. Rodrigues relaxing on the porch of one of the beautiful historical homes in Georgetown, the third oldest city in South Carolina, behind Charleston and Beaufort. Couldn’t have asked for a more pleasant experience!