Bill’s daughter, Sarah, grew up on the Jersey shore and has spent her professional life in New York City and now Los Angeles. Several aspects of Texas, and specifically the San Antonio Stock Show and Rodeo, were new exposures for her, in much the same way that they were for me and Bill when we first visited as workampers years ago. So, after our olive and tulip experiences, there was still a lot to do and see before Sarah headed back west! 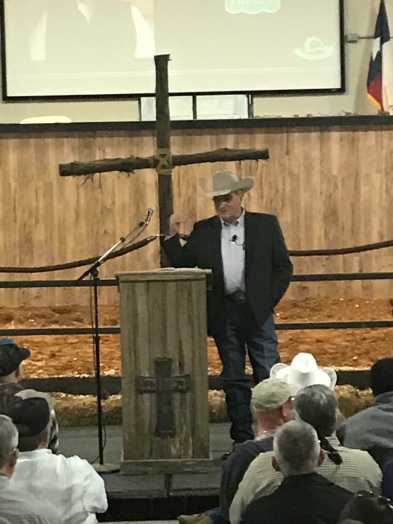 Sunday began with a donut at Cowboy Church and another fulfilling hour of “Cowboy Fellowship.” The musical group this week was the Christian Country Music Ministry and the speaker was a very well-known horse auctioneer, Steve Friskup, who, with his wife, are pastors of a Cowboy Church in Muleshoe, Texas. The band put somewhat of a swing spin on some recognizable hymns while the message was very personal.

Following church, we cruised through several of the show barns, and the hopping one this day was the Swine Barn. The barn was packed with pigs and families, including numerous children taking care of their pigs. We also viewed the cow-milking demonstration, various animals on display and some mutton-busting! Although the mutton-busting at first was disturbing to Sarah, the more we watched the more comfortable she became. Indeed, it is somewhat difficult to understand how parents can allow their little ones, ages 4-7, to jump on a sheep, hold on for dear life, and blast out of a chute to see how long they can stay on the sheep! 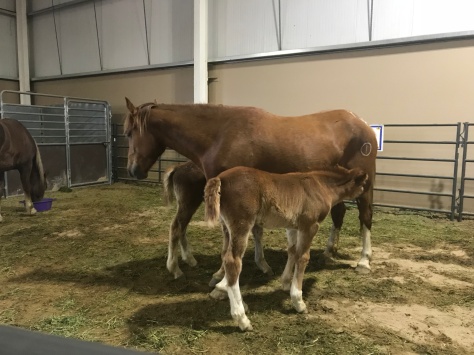 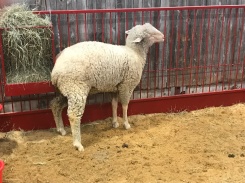 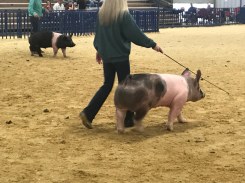 We continued to learn about various animals…Did you know…

We also had a great time people-watching as we viewed little cowboys and cowgirls and a true cowboy steaming a genuine cowboy hat to form it to the buyer’s head! Later Sunday night we enjoyed some authentic Mexican food at Tito’s – including a superb margarita made with Herraduna Double Barrel Reposado Tequila!

Monday brought a warmer temperature, perfect for bike-riding, which is exactly what we did! Our 4-mile trek on the San Antonio Riverwalk Bike Trail brought us to The Guenther House for brunch and a delicious brunch it was! Pedaling back 4 miles to the campground following our meal was definitely necessary and totally worth it! 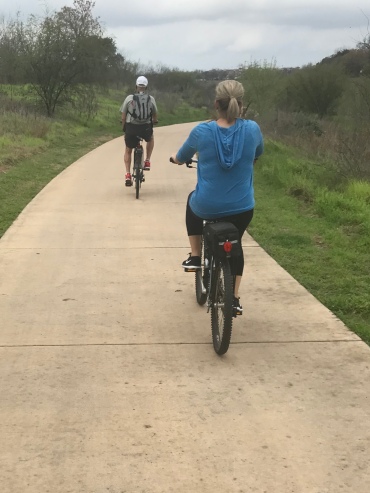 We decided to really play tourist, so we took the bus later Monday evening downtown to the Riverwalk. It was a beautiful evening as we took in the sights – sightseeing river cruises, wandering mariachi musicians, and even a young 15-year old having photographs taken for her quinceanera celebration! We enjoyed drinks and apps at the Esquire Tavern, which is the oldest bar on the Riverwalk and “boasts the longest wooden bar top in Texas – over 100 feet of beer-soaked wood, rubbed smooth by the elbows of a zillion tipplers.” 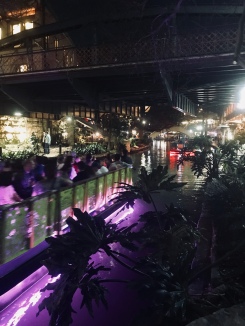 Tuesday was yoga day, as Sarah attended the glass that I lead two times a week here at Traveler’s World, while Bill took a 10-mile bike ride! The weather turned about mid-day and by the time we left for the evening competition and concert at the rodeo, we had gone from AC to heat and from shorts and T-shirts to sweaters and heavy coats – not fun! 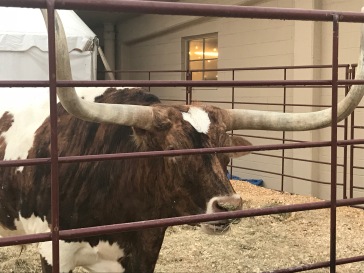 The rodeo, however, was lots of fun! With each night’s ticket, you experience 2 hours of rodeo competition and then a headliner concert from 9-11! Before entering the arena, we were distracted by two huge Texas longhorns on display. A rancher from Fredericksburg, Texas, was there and shared some basic information about longhorns. The two we saw , named Casino and Vegas, were raised for show – divas if you will – and weigh over 500 pounds more than those who live out on a ranch.

There are seven rodeo events each night and Tuesday was the first night of semi-final competition. The events (in this order) include: bareback broncos (Sarah’s favorite), steer wrestling, team roping, saddle broncos, tie-down roping, barrel racing (the only female event), and bull riding. Also inserted in the line-up was some more mutton-busting! Bull riding is probably the most exciting as the rider must stay on the raging bull for a full 8 seconds. Tuesday night only two cowboys were able to accomplish that feat! Dierks Bentley put on an awesome show following the competition, singing old and new songs and welcoming two special guests, a young guitarist – named after Dierks – and country singer/songwriter Kevin Fowler. 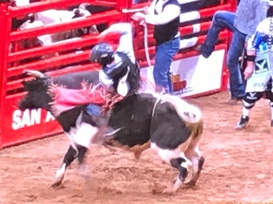 Interesting to note about the rodeo… I grew up believing that everything is bigger and better in Texas, due to my Texas mother, and I certainly witnessed elements of that at the rodeo. We saw the biggest belt buckle ever, along with large and Texas-style restroom symbols! 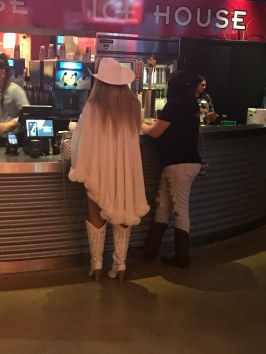 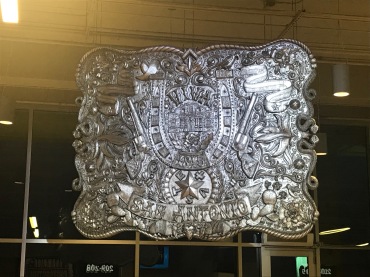 Wednesday marked the end of Sarah’s visit, and she couldn’t leave Texas without going to Whataburger! She had never had Whataburger before and was anxious to compare it to California’s In-N-Out burger. After playfully bantering with the manager about both burgers, upon eating one, she stood fast in declaring In-N-Out the better burger!

We totally enjoyed Sarah’s visit to San Antonio as it enabled us to share some of the area’s highlights! She was certainly able to “Cowgirl Up” while with us, and Texan fun was had by all!