Most often when Bill and I are traveling and stop at a campground overnight we don’t even disconnect the Jeep from the motorhome. We just relax, take a long walk, and eat dinner in the RV. Last night, however, we landed in Lafayette, Louisiana, disconnected, and had an awesome evening in Cajun country!

We had seen numerous billboards along I-10 advertising “boudin,” cracklin’,” and “etouffee,” just to name a few delicacies. We decided to dine at Don’s Seafood, “a true Cajun tradition since 1934,” with the intent to learn more about Cajun cuisine as well as try it. The first thing we admitted to our server, Denise, was that we were from New Jersey and had no idea what we were doing. She laughed and said, “No really, you’re not from New Jersey – I’m from NJ!” Long small world story short – Denise grew up in Manasquan, NJ, where Bill’s daughter, Cara, and her family live! She had graduated from the high school there a year before Cara’s husband, Pete, in the early 80’s. Well, from that point on we were fast friends and Denise made sure we had a true taste of all the local favorites!

To get started, we ordered “boudin balls” – pronounced “boo’-dan.” Boudin is a sausage made from pork and rice. It was served with a tangy pepper jelly and was quite tasty. While we were sampling boudin, Denise returned with a small dish of crawfish and proceeded to demonstrate how to “pinch and pull!” Once I got past the beady little eyes, the meat was delicious. 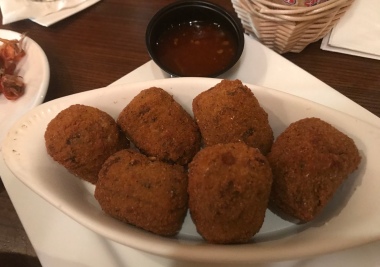 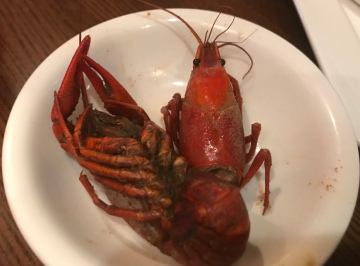 Next up, Denise arrived again, this time with two oysters to sample. Oysters at Don’s are prepared on an open fire – one was the regular oyster, on the half shell charbroiled with garlic butter and Romano cheese and the second was what they call their “jacked-up” oysters! These are charbroiled with bacon, jalapenos and pepper jack cheese. I could easily learn to like oysters prepared this way! Although it was all over the billboards, there was no “cracklin'” on the menu which was fine- I was happy to pass on the “fried piece of pork with a small amount of attached skin!” It is, however, quite a popular treat in Louisiana. 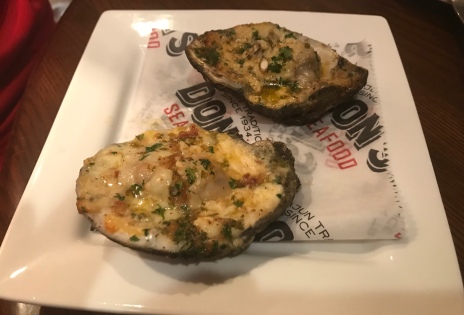 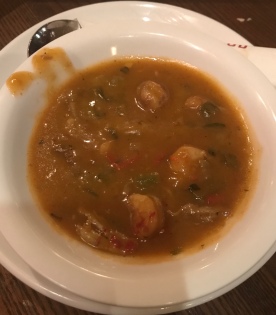 Finally – and we were still in “sample mode” with our server mind you, she brought us a small bowl of crawfish etouffee, a stew of sorts containing the shellfish along with rice and sauce made with tomatoes, onions, celery and bell pepper. It was wonderful! We continued our Cajun feast by splitting an entree of shrimp etouffee! We couldn’t thank Denise, our New Jersey transplant, enough for guiding us expertly through a Cajun culinary chow-down! It was truly amazing!

Since we were in Lafayette, the home of the University of Louisiana – Lafayette, we decided to get up really early this morning and stop into the bookstore for some “Ragin’ Cajun” gear! Oddly, the store opens at 7:40 a.m., and we were there! A polo, T-shirt, and hat later, we headed back to the campground to reattach the Jeep and take off!

As a side note, we were, in fact, so early to the university bookstore that we stopped for breakfast at Waffle House. Now, if you’ve ever been to a Waffle House you know it’s quite an experience. Usually you are greeted by all of the servers and cooks as you walk in – “Morning, Morning, Morning!” And then it’s very entertaining to watch the show – servers shouting out orders seemingly in code, and the cooks knowing exactly what to prepare. Unfortunately, this was the most subdued Waffle House I have ever witnessed – no greeting, no flair…but the coffee was really hot and the food did not disappoint. I always get the hash browns, “smothered and covered” but look at all the other ways you can get them! We hadn’t been to a Waffle House in quite a while and we can only hope the staff woke up and found their spunk as the day wore on!

So, the take away from our evening and early morning in Lafayette, Louisiana, is… never hesitate to “disconnect” – it’s amazing what you might discover!