As we continue to workamp in various US cities, it has been interesting to experience Independence Day around the country. I recall a parade in Torrey, Utah where the campground built a float and participated – first place winners I might add! And then another hometown parade in Ashton, Idaho, where the participants threw little milk cartons and of course potatoes, rather than the traditional candy. And we can’t forget the fireworks on the beach in Wells, Maine, similar to our displays at home on the Jersey shore. 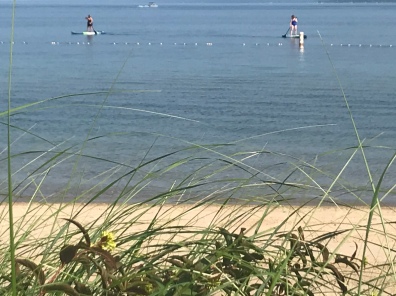 Our 4th of July here in Empire, Michigan began with a drive south to Beulah, where we enjoyed bagels and coffee on the beach! The bagels at L’Chayim Deli are as good, if not better, than any NY style bagel we have ever eaten. With coffee in hand we strolled to the beach on Crystal Lake and just took in the sights for a while – early morning paddleboaders, kayakers, swimmers, and others just marking out their beach territory for the day!

Following our people-watching we headed back to Glen Arbor to prepare for their traditional Independence Day parade. As one gentleman near us said, “It’s like stepping back in time to somewhere in the 1950’s – just a good old hometown parade!” We had enjoyed the parade two years ago so wanted to experience it again, and it did not disappoint!

It was sweltering hot, which is unusual for this area, so everyone was looking for a spot in the shade. We were lucky enough to find such a location right outside Art’s Tavern, where the beer and bloody mary’s were flowing and the hot dogs and brats were grilling!

The parade started around 12;15 and for the next hour we saw all kinds of sites. It appears that anyone may enter the parade, and it’s obvious that a major portion of the town and its surrounding areas take advantage of it! These are just some of the participants we witnessed… 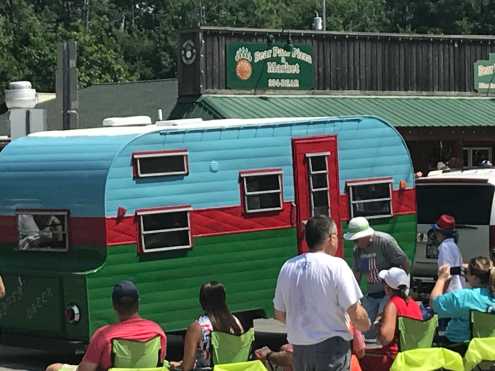 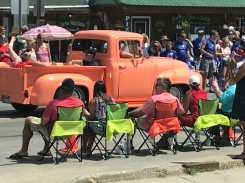 A fine time was had by all of the hundreds of onlookers – truly a tradition like we have never experienced!

The rest of our day was lazy – we barbequed but didn’t even rally for the fireworks! Remember, here in upstate Michigan the fireworks don’t even start until after 10:30 when it finally starts to get dark! All in all, another unique July 4th to add to our list of experiences!