Since yesterday was the longest day of the year, and we had a day off, Bill and I decided to make the most of every hour!

Most mornings begin with exercise and today was no different – Bill completes a 10-12 mile bike ride while I attend a circuit training class at Sleeping Bear Bay Club in Glen Arbor. By the time I’m done, Bill has arrived at the same spot.

This morning we shared a cup of coffee and decided to take an alternate route home and revisit Pierce Stocking Scenic Drive, part of the Sleeping Bear Dunes National Lakeshore. This 7.4 mile drive is actually a loop with several overlooks and trailheads that enable one to experience magnificent vistas of Lake Michigan, Glen Lake and Sleeping Bear Dunes. By stopping at the various points along the drive, one also gets an insight to the history of the area and the various vegetation present. 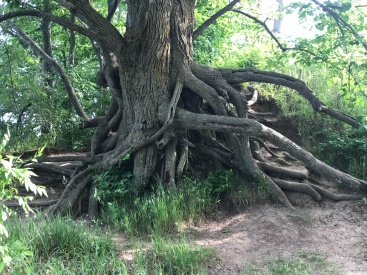 And who, you ask, was Pierce Stocking? Pierce was a lumberman in the local forests and was awed by the beauty he experienced every day. Since he had experience building roads in difficult terrain, he began planning the scenic drive in the early 1960’s and the road officially opened to the public in 1967. Pierce continued to operate the scenic drive until his death in 1977, at which time it became part of the Sleeping Bear Dunes National Lakeshore and was renamed to honor its creator. Pierce Stocking Drive is a definite “must-do” for visitors to the area.

Next on our list for the Summer Solstice was golf. Since Tuesday’s game was not our best, we headed for the driving range and then decided to play. The outcome was much better and the weather was delightful!

After regrouping apres golf, we traveled to Traverse City – the closest large city to our location in Empire – to pick up some necessities and grab a sandwich and some wine at Folgarellis – the awesome Italian deli we frequent. From there we continued northward to Mission Peninsula, more specifically to Chateau Chantal, for Jazz at Sunset!

Chateau Chantal is a vineyard and bed and breakfast overlooking Grand Traverse Bay. An absolutely beautiful spot, Jazz at Sunset is a weekly Thursday occurrence that has been happening for 25 years! Although the crowd was on the older side – but perhaps we fit right in – the music was great, featuring the Jeff Haas Trio with vocalist Claudia Schmidt and saxophonist Laurie Sears. Claudia opened her set appropriately with Summertime , and interspersed her songs with unique poetry recitations.  While the group performed, a watercolorist, Lisa Flahive, created a painting with as much energy as the musicians themselves! What started as a blob of color as we stood in line to purchase our wine, resulted in an amazing watercolor of the performing group! 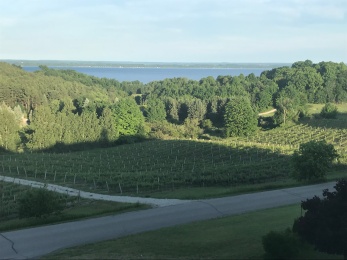 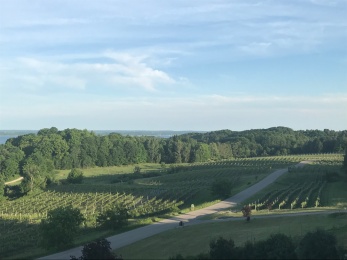 Following the jazz, we returned toward home, but not before rushing to Empire Beach to share the Summer Solstice sunset at 9:33 p.m. Quite a crowd had gathered at the beach – families around beach fires roasting marshmallows, children enjoying the new massive playground, and couples toasting with adult beverages as the sun slowly descended.

What a wonderful way to spend the longest day of the year! We certainly couldn’t have squeezed much more into our day, and we enjoyed every moment! Happy Summer!