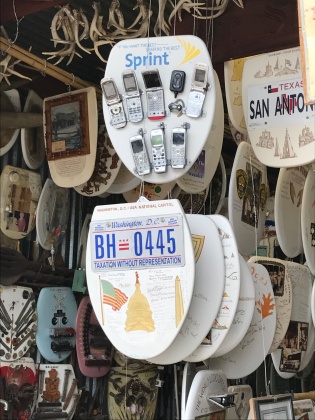 So…when you have a guest in town and you’ve already visited the major attractions in San Antonio – Riverwalk, Tower of the Americas, Missions, The Alamo, Chicken Shit Bingo and more – then what do you do? You make a stop at The Toilet Seat Art Museum in Alamo Heights of course!

Our adventure began with lunch at The Winchester, a new bar/restaurant that mixes Texas with the English Pub. We started with “bad ass bacon,” an appetizer of spicy, maple-glazed bacon and then continued the culinary experience with fish and chips, brisket grilled cheese with jalapeno-orange marmalade, and chilled shrimp cocktail – talk about eclectic! We didn’t linger, however, because we had a 1:30 appointment with Barney Smith, the “King of the Commode!” – I kid you not! 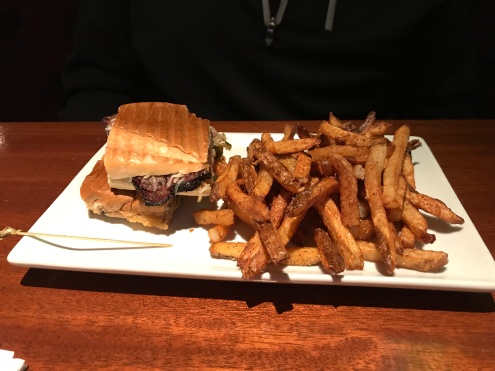 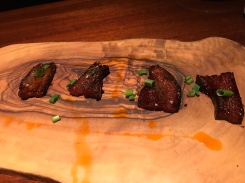 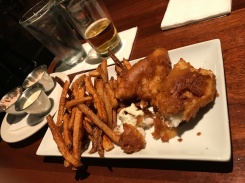 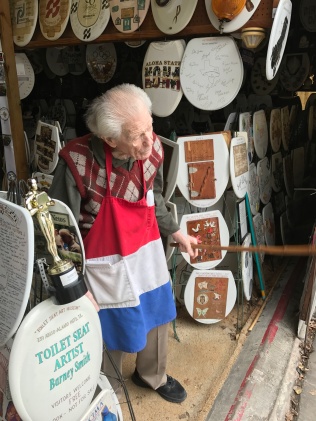 Barney Smith is a 96-year-old retired plumber who is the curator of his museum containing 1,334 artistically crafted toilet seats. Visitors are welcomed by appointment only – he opens at 1p.m. and then will ask you to help him close the garage door after the last visitor. It was an absolutely amazing place, governed by the smartest 96-year-old I have ever met. Barney knows where every toilet seat is – from his earliest created to his most recent – and he uses his walking stick to point out each one!

Each visitor to the museum is invited to sign the toilet seat that represents their state. We found New Jersey but had to sign the “second overflow” seat as the others were completely filled with the signatures of fellow New Jerseyans! I could have stayed for hours just glancing at all of Barney’s creations – I took pictures of the seats that made me think of people in my life – Route 66, Elks, Star Wars, Kentucky Derby, Cosmetology, Pipes, The Challenger, and more! A high point in our visit resulted from asking Barney what his favorite toilet seat was. Of course he pointed to it and then began to recite from memory the Rudyard Kipling poem that was painted on the seat entitled, “When Earth’s Last Picture is Painted.”  The poem describes a world with no criticism, where everyone is free to realize their own vision. Need I say more? 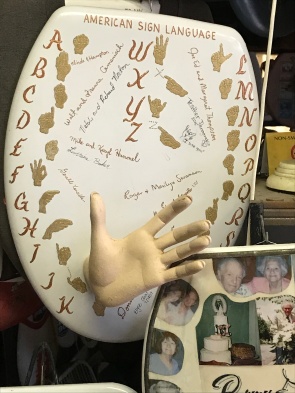 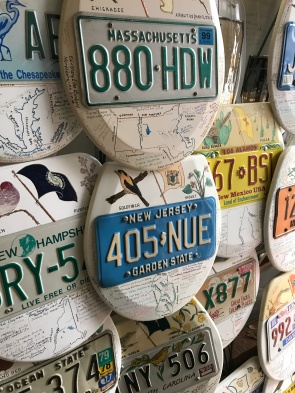 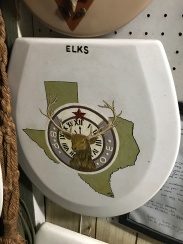 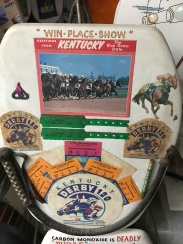 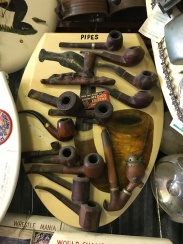 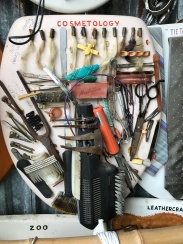 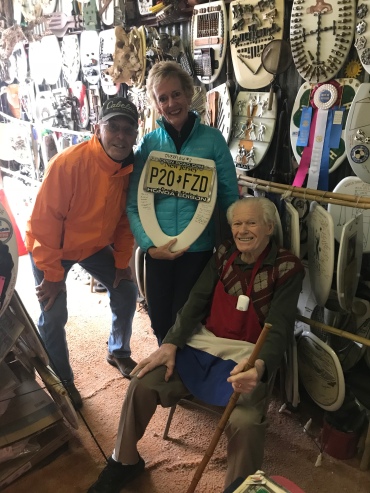 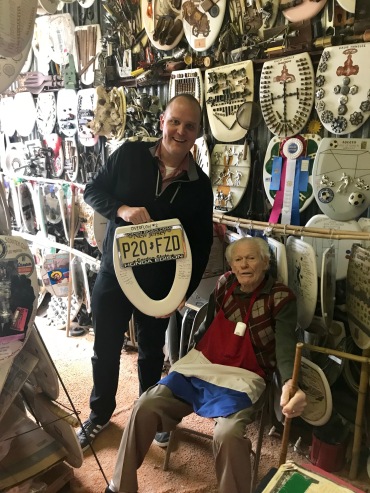 One of the toilet seats depicted CBS Sunday Morning and a story that Bill Geist had presented on the museum quite a few years ago. In the depths of my memory I vaguely remember this story. How wonderful it was to meet Barney Smith in person and interact with this creative and sharp gentleman. It is believed that staying active contributes to one’s longevity – Barney Smith is proof of that belief. (Those of you who receive the HOG magazine will see a story about Barney and the museum in your most recent edition!) 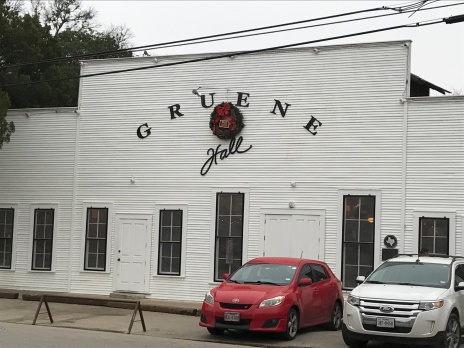 From the Toilet Seat Art Museum, we headed to the city of Gruene (pronounced “green”), which is home to Gruene Hall, the oldest dance hall in Texas. The hall was built in 1878 and has been continually operating since then. Not much has changed since then in this 6,000 square foot dance hall with a high-pitched tin roof and side flaps for windows. Many famous musicians have performed there, while there is a strong emphasis on spotlighting new singers and songwriters. We enjoyed adult beverages and listened to the music of Bo Porter. 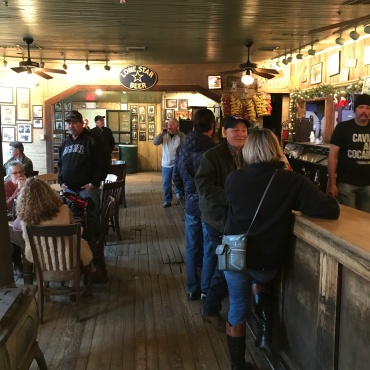 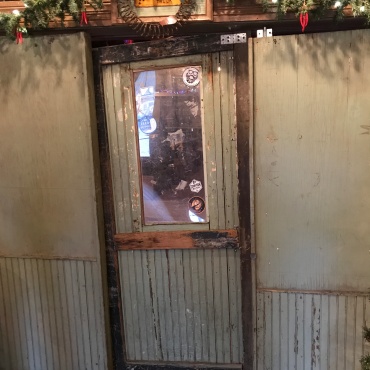 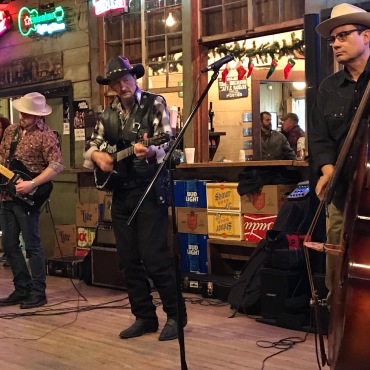 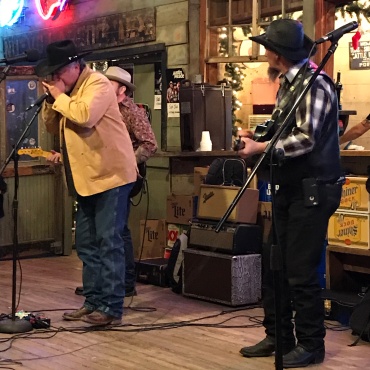 Our final stop of this fun-filled day was at The Pearl, a district in the “Mission Reach” of the San Antonio Riverwalk that sits on the site of a former brewery. The actual Pearl Brewery has been transformed into a very upscale, high-end hotel – Hotel Emma – and the surrounding “industrial chic” area boasts shops, restaurants, a weekly farmer’s market and continually appearing high-rise condominiums and lofts.  The Culinary Institute of America also calls The Pearl its home. The Pearl is a must-see for those visiting San Antonio. 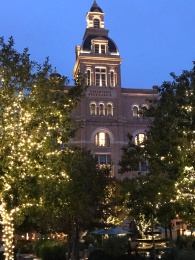 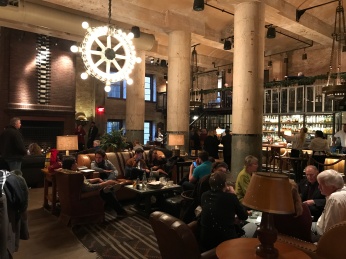 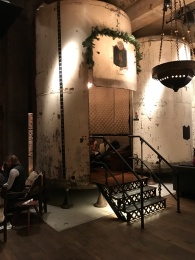 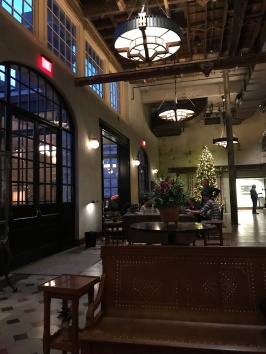 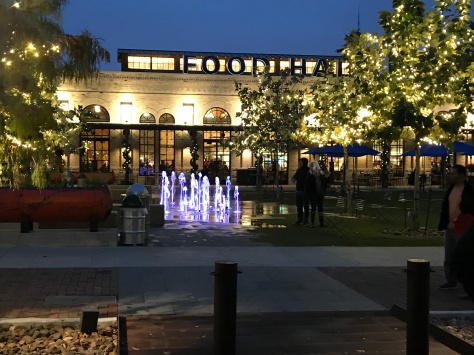 Well, we couldn’t have fit anything else into the day after Christmas although we did stop and pick up salad and pizza to accompany us as we watched a movie when we got back to the motor home!