Today was our first day off after working a full five-day week at Atlantic Oaks Campground on Cape Cod. We survived the Memorial Day weekend, experiencing much the same phenomena we see each year at the Jersey shore! In fact, I doubt if we will go anywhere on weekends unless we can bike there! There is only one road onto the Cape and one off so travel timing is critical. At one point I heard that the back-up at the bridge leading off the Cape on Memorial Day was 10 miles long! Sound familiar, my New Jersey friends?

Following a refreshing run on the bike trail, we decided to head to Provincetown after running a few errands. Before leaving Eastham, we stopped into ARTichoke, a really unique store selling hand-painted clothing, accessories, art and gift items. They’re all about supporting local businesses here on the Cape as there are few, if any, chain stores of any kind – except the infamous New England Dunkin’ Donuts!

Of course it wasn’t raining when we left, but by the time we drove the 25 miles to the northernmost point of the Cape, it was raining quite heavily. If you recall, the last time we drove to “P-Town” – as the locals call it – it was cloudy and downright cold, so now we can check off rain as well!

Well, what else does one do on a rainy day off? Day-drink and eat lobster – of course! One thing we wanted to see were the results of a tragic restaurant fire over the weekend. The Red Shack, a well known P-Town restaurant, was destroyed by fire over the holiday weekend and the two businesses on either side are now closed indefinitely.

Our culinary destination was the Lobster Pot, truly a Provincetown institution! Located right on the harbor, the restaurant has two floors and an outdoor deck upstairs. Needless to say, no one was dining outdoors today, but the “Top of the Pot” is a very popular spot on nice days, as you can imagine. Bill ad I continued our private clam chowder competition, accompanied by a crisp Chardonnay, and followed that with a lobster roll for Bill and a lobster avocado cocktail for me! Imagine a base of sliced avocado, layered with the meat from a 1-1/4 lb. lobster, and topped with a mango chutney – truly to die for! 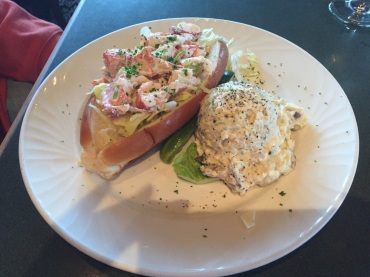 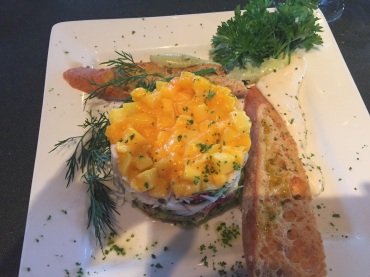 Provincetown has had a strong Portuguese community since the 19th century and one of the most popular stops along Commercial Street is the Provincetown Portuguese Bakery. We had been told by fellow workampers that we had to try the “malasadas” – a traditional Portuguese doughnut – basically fried dough rolled in sugar – what could be better? If you arrive earlier in the morning, you can witness the baker making malasadas in the window and serving them hot! Well, hot or not, it was delicious! 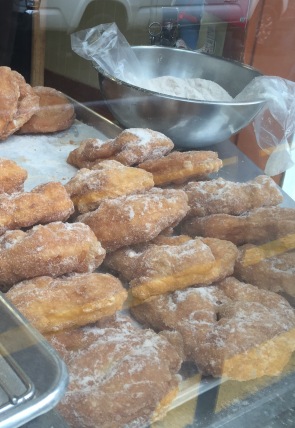 The rain continued to fall, so we drove out to Race Point Beach, part of the National Seashore, after cruising the side roads in Provincetown and along Route 6A by the bay. We made our way back down to Eastham, after a “food-filled” day in P-Town! Love our days off!!

One thought on “Day Drinking and Eating Lobster!”