I know it’s early in the season, but if I had to pick one of the quaint, Cape Cod towns we’ve investigated thus far to call home, today I would pick Chatham! Wednesday, May 17th we headed for Chatham, located about 15 miles from us – in the “elbow” of Cape Cod, for you visual learners! We drove along Shore Drive, which enables you to see the magnificent homes that sit right on the dunes overlooking the beaches…so you daydream and can even see the Kennedys walking to the beach or playing football on one of the expansive front lawns! Home after home of cedar shakes, dormers, widow’s walks, and some with family tennis courts – what more could anyone need or want? It only took a few miles of such scenery until I snapped back to reality and stopped to buy a lottery ticket! 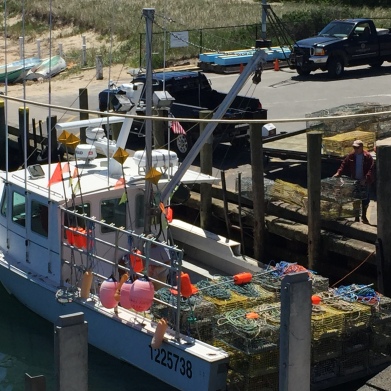 Seriously though, the town is amazing! Our first stop was at the Chatham Fishing Pier where we were told you can often see seals as the fishing boats come in and out. We didn’t – probably because it was the middle of the day, but it was fun to stand on the pier and watch a few lobstermen rope their traps, seemingly getting ready to depart.

We continued on to the “town center” as they say, and enjoyed a stroll through town which boasts a variety of unique stores and galleries. I had read about an olive oil and vinegar store so we found it and I purchased some herb-infused olive oil since I was out of what I had bought in Michigan and Texas – delish! Surprisingly, we were ready for lunch, and since the restaurant that had been recommended wasn’t open for the season yet, we stumbled into the Impudent Oyster – isn’t that a great name? 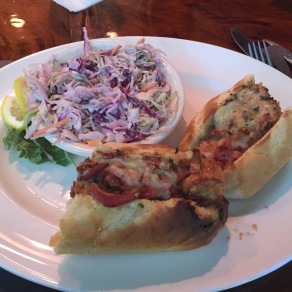 We sat at the bar and had one of our best meals to date! Look at my sandwich – a grilled scallop sandwich with melted Monterey Jack cheese – to die for! Bill dived into his Shrimp Po’ Boy before I could take a photo, but lunch was delicious and we were armed with energy to continue our journey.

Our method of madness when we “explore,” is to just pick a road and travel it until we can’t go any further – it’s amazing what you’ll find. Well, we found Monomoy National Wildlife Refuge where we took a hike down the dunes to the beach. At this location, we learned that every day at 6 a.m. and again at 6 p.m. a weather balloon is launched which yields valuable information about weather conditions and forecasting… who knew? 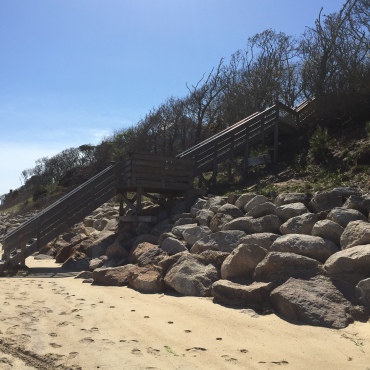 Continuing on, we really did reach the end of the line as you can see in the photo. So…we  turned around! We took that as a sign that our day in Chatham was complete and it truly was a great one! 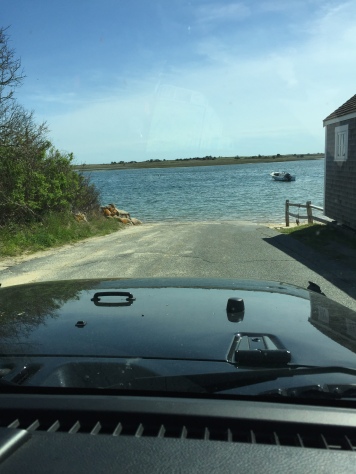