For as much as we enjoy returning home to New Jersey in between our workcamping adventures to spend time with family and friends, we always look forward  to our next stop with anticipation and a tad of trepidation (fear of the unknown!). We decided to take our time on our way to Cape Cod for the summer, so after stopping in Manasquan to see Bill’s grandson Adam play in one last baseball game, we traveled to East Lyme, Connecticut and spent three nights at Aces High RV Park. I had discovered that Faith Hill and Tim McGraw were stopping at Mohegan Sun Casino on their Soul to Soul Tour, so we had selected a campground convenient to the venue and purchased tickets for Saturday, May 6.

One of the things that excited us about being in New England was the plentitude of available fresh seafood, and we began that quest in Connecticut. We stumbled upon Flanders Fish Market and Restaurant on our first night and enjoyed it so much we returned two nights later! It was a delicious reunion with haddock and lobster, not to mention shrimp, clam strips and crab cakes!

Continuing in the food mode, in much the same way that we search for perfect pizza wherever we travel – coming from New Jersey we only settle for the best – we have also become donut critics and lo and behold we hit the jackpot in Connecticut! With a line out the door and where they close the door daily when they sell out, we experienced Flanders Donut, Bagel and Bake Shop. Great coffee, coupled with a wide variety of freshly baked donuts and bagels made this a go-back-to place as well! When people ask me why I work out regularly, now you know why!

During the day on Saturday we explored the area including Niantic, Waterford, and New London. In Niantic, we walked the boardwalk, which is a seawall along the Niantic Bay which meets the Long Island Sound and runs parallel to the Connecticut Amtrak Corridor. Even on a rather cloudy and damp day, there were plenty of locals walking and running the boardwalk. 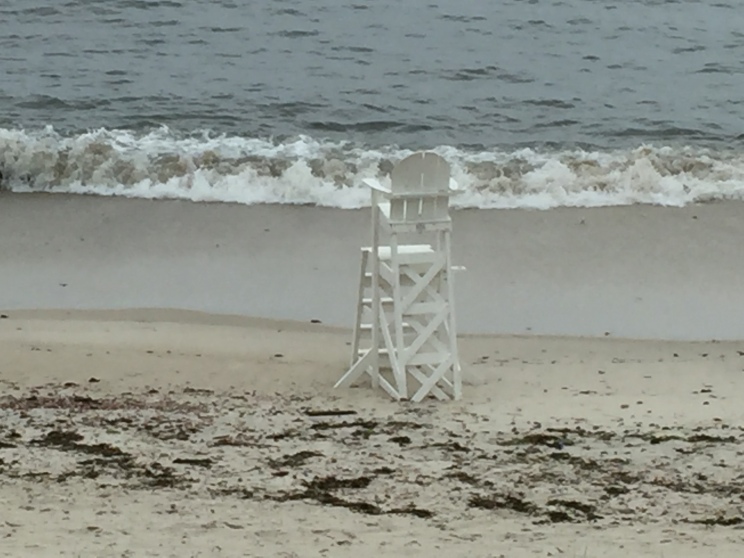 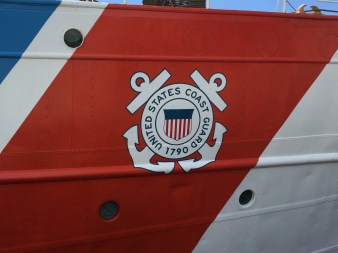 Our next stop was the Coast Guard Academy in New London, where we had read that the Eagle, a tall ship, was docked and ready to depart as the summer training program for cadets was beginning. What a beautiful ship and how neat it was to meet a young man from Ohio who had just finished his eight -week boot camp in our own Cape May, New Jersey! He admitted he had not had much time to enjoy the quaint town but he had enjoyed his time at the Coast Guard base. The Eagle was due to depart at 15:00, according to our new cadet friend, heading to Bermuda and then various sites on the East Coast and several in Canada. 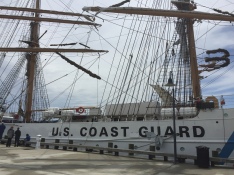 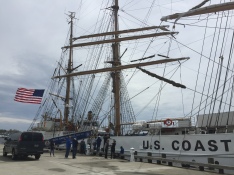 After our day of exploration we regrouped and headed to Mohegan Sun for the concert. It was an awesome show at a beautiful casino. Tim McGraw and Faith Hill – need I say more?

Today, we drove to Middlebury, Connecticut, to meet a man that had played football for Bill at Susquehanna. We met Bruce Cianciolo, along with his wife Julia and oldest son Joe, for lunch at Maggie McFly’s and spent almost two hours sharing stories and catching up. I have been in this situation several times now and I must say I truly enjoy meeting his former players and hearing stories about Bill’s coaching days. He really has had quite an effect on so many people through the years – they are better people because of their relationship with Coach Moll!

Laying low tonight – after another dinner at Flanders Fish Market and Restaurant – and looking forward to completing our journey to Cape Cod to begin another excellent summer adventure!

** As the camping season begins for many of you, don’t forget to check out the “Store” page for some one-of-kind T-shirts!**

One thought on “On the Road Again!”