Although here in Westminster, South Carolina we dodged the weather bullet, throughout the “Upstate,” many areas experienced a turbulent evening filled with damaging wind, rain, and hail. After such  a raucous display of wild weather, this morning dawned remarkably, with a clear blue sky and crisp temperatures – a perfect day for a road trip!

We headed north, our first destination being Cashiers, North Carolina. About four miles before reaching the downtown area, we stopped at Silver Run Falls, a 25′ ft. waterfall at the end of an easy hike. Western North Carolina is known as the “Land of Waterfalls” and as we added four more waterfalls to our list of discoveries, the area truly continues to live up to its name. Apparently, there is an upper area to Silver Run Falls, but we were unable to determine a safe way to get there, so we settled for the view from below – certainly not a disappointment. In the town of Cashiers, which sits at 3487 ft., we discovered that this is still the “off season” as many shops and restaurants are either closed or open for limited hours, so we stopped at a very unique coffee shop for a cup of java and shared a muffin.

Looking at the map – yes we did consult a paper map – remember them? – we decided to drive further north toward Sylva, NC. We had actually spent spring break in that area in 2001 at Mountain Brook Lodge and we were curious to see if it was still there! On our way, we drove through Cullowhee which is the home of Western Carolina University, another very beautiful college campus in the Blue Ridge Mountains. We reminisced as we toured Sylva, seeing many new locations of course, but also spotting the restaurant where we had eaten Easter dinner, the area where we attended a real Easter parade complete with bonnets, and yes, we even found the Lodge, which is still operating!

Leaving the Sylva area, we turned southwest and headed toward Franklin and then south to Highlands. Between Franklin and Highlands there was a 7-mile stretch of road that wound its way along what is known as the Cullasaja Gorge, located in the Nantahala National Forest. What an absolutely magnificent drive! We actually stopped four times to see the Upper and Lower Cullasaja Falls as they seemed to gush and then meander and then gush again – all along the gorge. Unbelievably beautiful! 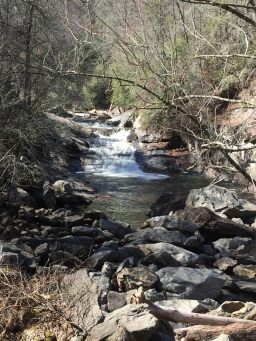 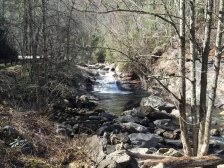 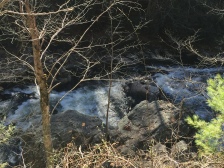 Before arriving in downtown Highlands, we stopped to view yet another waterfall, Dry Falls. Dry Falls is a 75-ft. cascade that tumbles over a cliff, allowing visitors to actually walk behind the falls as well as viewing it from the base and also from an observation deck. Unfortunately, the walkway under the falls was closed off, but the vista was awesome! I was even able to snap a photo of a rainbow at the base as the water flows down into the  gorge.

Not even a mile from there, we stopped at Bridal Veil Falls, a 60-ft waterfall that you can actually drive behind! It is located right on Hwy. 64. I would call it a delicate cascade, not containing an overwhelming amount of water but certainly beautiful. Here too, as at Dry Falls, the roadway to drive behind the cascade was closed, most likely due to the wicked rain we experienced last night. We had also stopped at Bridal Falls on the motorcycle in 2001, so once again it was a stroll down memory lane!

Highlands was most likely the highlight of our adventure (no pun intended). A beautiful town of approximately 3200 people sitting at an elevation of 4,118 ft, Highlands is “all about shops, restaurants, and golf courses,” as a very friendly shopkeeper shared with us. The town is filled with gorgeous homes, old inns, and historic churches. Even though still in the off season, here in Highlands there were many more stores open and we had lunch at our shopkeeper’s recommendation at Mountain Fresh Grocery. Have you ever tasted a bacon, brie, fig and apple sandwich? It was to die for! Yes, there were a few groceries for sale here but it seemed to be more of a gathering place for locals of all ages. In addition to the deli, there is a wine bar, a coffee bar, bakery, and more! Truly a unique establishment.

We were actually in three states today – NC, SC, and even GA for a bit! From Highlands, we headed back to Westminster, which actually completed our adventure circle for the day – and a wonderful circle it was!!

One thought on “Cruising Through the Carolinas!”