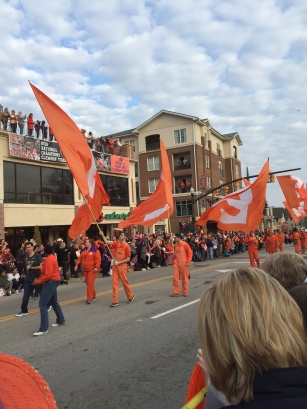 When the alarm sounded this morning at 6 a.m. I swore it was a mistake! Not much gets me out of bed that early, but today we planned to attend the Clemson Football Championship Celebration, which included a parade through the city of Clemson, followed by a celebration at Memorial Stadium! The local media was encouraging people to go directly to the stadium and watch the parade on the big screen, but we wanted to experience the parade up close and personal!

After a quick breakfast stop, we headed directly to campus and actually found a great parking spot. We had plenty of time – by now it was only 7:30 – so we walked along the soon-to-be parade route and ended up in downtown Clemson. Even at this early hour, most of the stores in town were open and operating. It was amazing to see all of the merchandise for sale in the stores as well as the items being hawked along the parade route. You could get anything imaginable from T-shirts to hats, from coffee mugs to wine glasses, and from footballs to tiger tales – and all of it including the 2016 Football Championship!

Our luck continued as we were able to temporarily secure a bench outside a very popular and exclusive men’s store, so we sat for a while and just took in the sights, and believe me, there were sights! Now it was only 8:15 with still 45 minutes remaining before the parade kick-off! I have never experienced such an amazing fan base as is evident in Clemson, South Carolina.

Everyone from the tiniest infant to the eldest couple was bedecked in orange and purple from head to toe, many even adorned with paws painted on hands and faces! Not having much of these two colors in my wardrobe, I had to do some pre-celebration preparation this week, and I felt right at home among the Clemson fans!

The parade itself lasted about an hour and included the Clemson marching band, cheerleaders, dancers, coaches, the college president and Board of Trustees, football personnel, the players and many, many others! The level of excitement among the fans was the same for the athletic trainers and media students as it was for the MVP’s and head coach, Dabo Swinney! When Clemson says “All In!” they really mean it! There is great respect for everyone who in some way contributes to the success of the football team!

We originally had not planned to attend the celebration in the stadium, but following the parade we were literally swept into the Frank Howard Field and became two of the estimated 70,000 people in attendance! Many dignitaries spoke and the trophy was passed around, but the words spoken by Coach Dabo Swinney, as well as several of the players, are what impressed me the most. Dabo spoke about the important thing not being that they won the championship but how they won. They have lived and breathed football since their loss last year to Alabama and played good, clean, hard, and focused football. Dabo also shared that 14 of his players had graduated in December, some completing their college education in only three years and that 38 of the players had made the Dean’s List this past semester. Being a very spiritual man, he shared that he had quoted Philippians 4:13 (I can do all things through Christ who strengthens me) to his players before the game, and that how ironic indeed it was that to win the game, #4, DeShaun Watson, threw a touchdown pass to #13, Hunter Renfrow! Any way you look at it, it was a very inspiring celebration. How humbling to see Ben Boulware, the defensive MVP, break down emotionally as he thanked the special people who had helped him along the way, or how gratifying to hear DeShaun Watson, the offensive MVP, thank his mother and Coach Swinney for the man he has become! I could go on and on, but it was wonderful to be part of such a big event, yet one with such a close-knit family feeling to it.