The hits just keep on coming – in the form of family and friends – and we’re loving it! This past weekend we were delighted to welcome my son, Matt, and Nicole and her two sons! They were here for approximately 42 hours and trust me when I say we made the most of every single minute!

To share, I thought I would try a somewhat different approach and travel through the alphabet as we zoomed through the weekend. Here we go…

A is for…Airplane. The crew arrived Friday at 7:30 a.m. from Atlantic City, which gave us the entire day to play – and play we did! Our first stop, however, was the Golden Egg for breakfast, always a good choice.

B is for …Baseball. Saturday afternoon we attended a Myrtle Beach Pelicans game. Nathan and Noah both play baseball so of course they enjoyed it. The Pelicans lost to the Columbia Fireflies but it was a fun time – very hot though, but the “mega pitchers” of Tito’s and lemonade helped!

C is for…Candy Store Ice Cream Treats. Following the baseball game we crossed the street to Broadway at the Beach which is an area of carnival rides, bars, restaurants, and stores. Among other things, we stopped at a candy store where the boys – and Bill, who can never pass up ice cream – delighted in some of the most outrageous milk shakes I’ve ever seen! 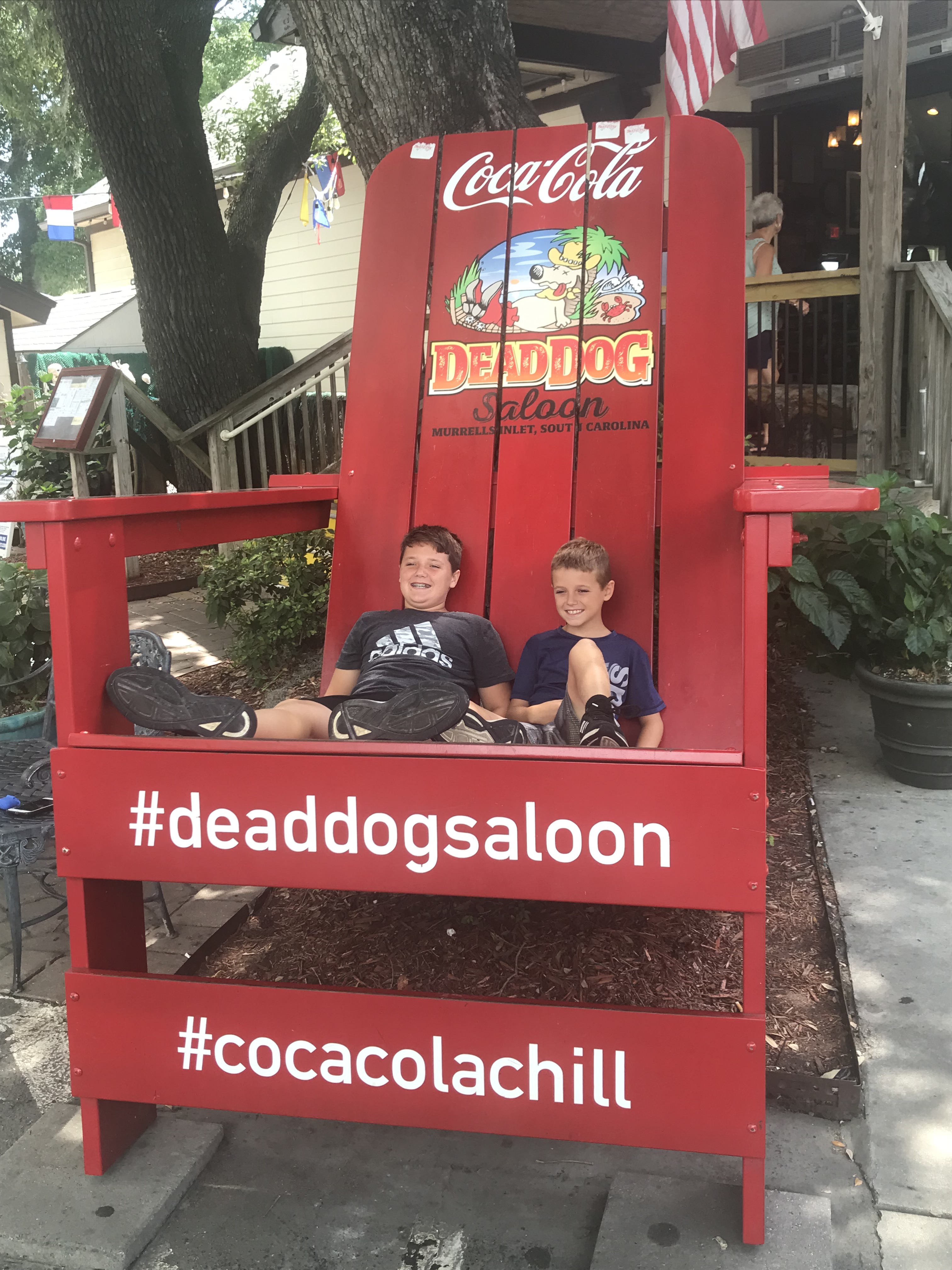 D is for…Dead Dog Saloon.  Sunday morning before taking Matt and Company back to the airport, we had breakfast at Dead Dog Saloon on the Marsh Walk in Murrells Inlet. The entire wall area in the restaurant is filled with framed pictures of peoples’ canines who have crossed over the rainbow bridge, and believe it or not, Matt spotted a pup from our hometown of Cape May Court House, NJ. It’s even a small world in a dog’s world!

E is for…Extreme Energy. Not much elaboration needed here, but the energy never stopped!

F is for…Feeding Fish. Following our Friday night dinner, we got ice cream and bought some fish food to toss to the huge fish – and turtles – in the nearby pond.

G is for…Grand Prix Racing. Saturday morning before the baseball game, we experienced Broadway Grand Prix Family Race Park. This was definitely a first for me! We bopped from track to track and raced on most of the seven available tracks. I’m not sure who had more fun – Bill , Matt, or the boys! 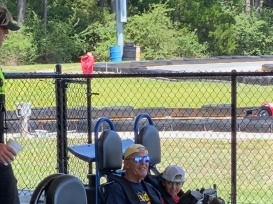 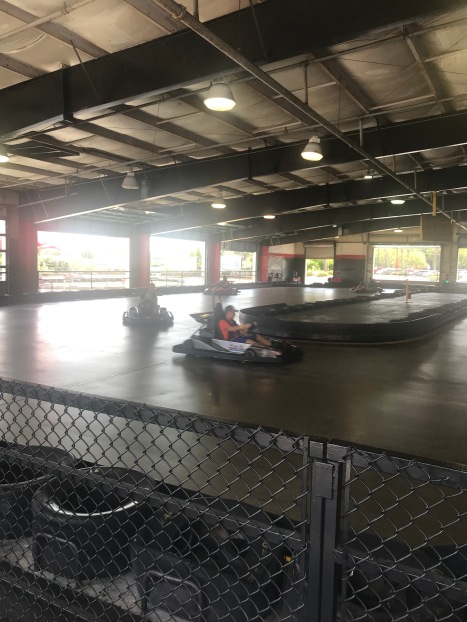 H is for…Hot! Hot! Hot! It was close to 90 degrees during the entire weekend but we kept moving so it was bearable! Nathan and Noah assured me it was hotter in NJ!

I is for …Itinerary. In the middle of the week, Matt had sent a possible itinerary for the weekend. Those of you who know Matt will not find this unusual, however, it made me laugh. I must admit it turned out to be a wonderful tool and we did every activity posted and most within the time period suggested! 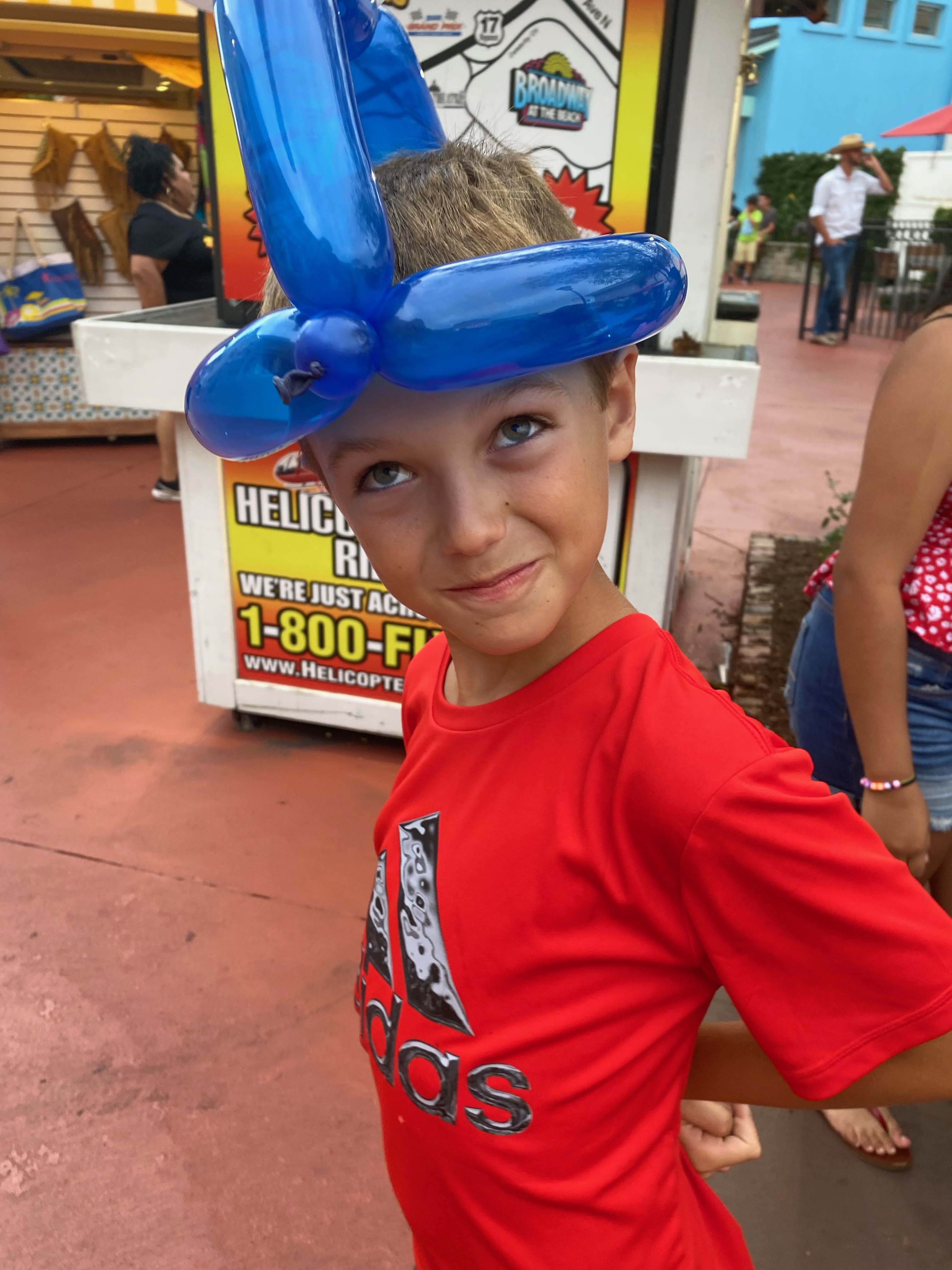 J is for…Joking Around. Again, not much detail needed but Noah and Nathan kept us laughing – typical brother behavior – best friends one minute – aggravating and annoying to each other, the next.

K is for…”Karen.” Never thought much about my name, but the boys gave me quite the education on what it means to be a “Karen-” complete with video examples. They assured me that even though that was my name, I really wasn’t a “Karen.”

L is for…Lots of Laughter. The underlying theme of the weekend was, indeed, laughter. A day without laughter is a day wasted – trust me we wasted no time at all!

M is for…Mt. Atlanticus. Our Saturday began with a miniature golf competition at Mt. Atlanticus. Myrtle Beach is known as the mini golf capital of the world and Mt. Atlanticus did not disappoint. After a hole-in-one on the first hole, I was feeling pretty confident through the front nine, but then Bill came on strong and beat us all! 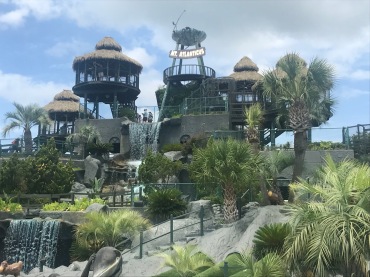 N is for…Nathan and Noah (and Nicole of course!) The weekend was all about these two boys who never slowed down!

O is for…”One More.”  This was a resounding chant during every activity. One more ride around the track? One more arcade game? One more amusement ride? Just one more!!

P is for…Pool Time. I was not too brave at the Water Park on Friday, but I did enjoy the pool – for cooling off, for people watching and for the waves!

Q is for…Quiet Time. I lie; there was none except when the lights went out each evening.

R is for… Rustic Table. After five-plus hours at the Water Park, we enjoyed a delicious dinner at Rustic Table. Matt, Nicole, and Bill opted for the steak special, but I had shrimp and grits which was wonderful! 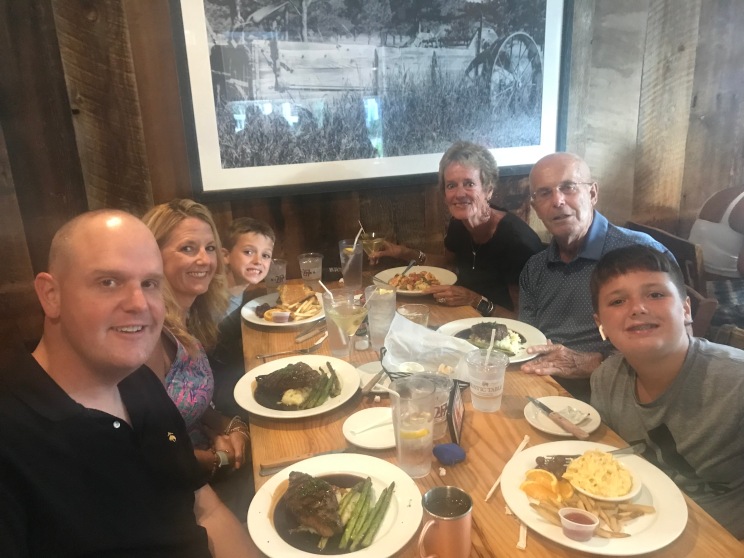 S is for…Splash. One of the highlights at the Myrtle Beach Pelicans game was the mascot, Splash! He adds to the stadium fun, and even though he never speaks, Noah seemed to have a nice conversation with him before the game started!

T is for…Table for 6! It was so much fun to have a large group for our eating experiences! And believe me we ate our way through the weekend!

U is for…the Usual Suspects. People watching has always been a favorite hobby of mine and this weekend was a gem! From the Water Park to the Boardwalk and from the baseball game to the race track – Just imagine! 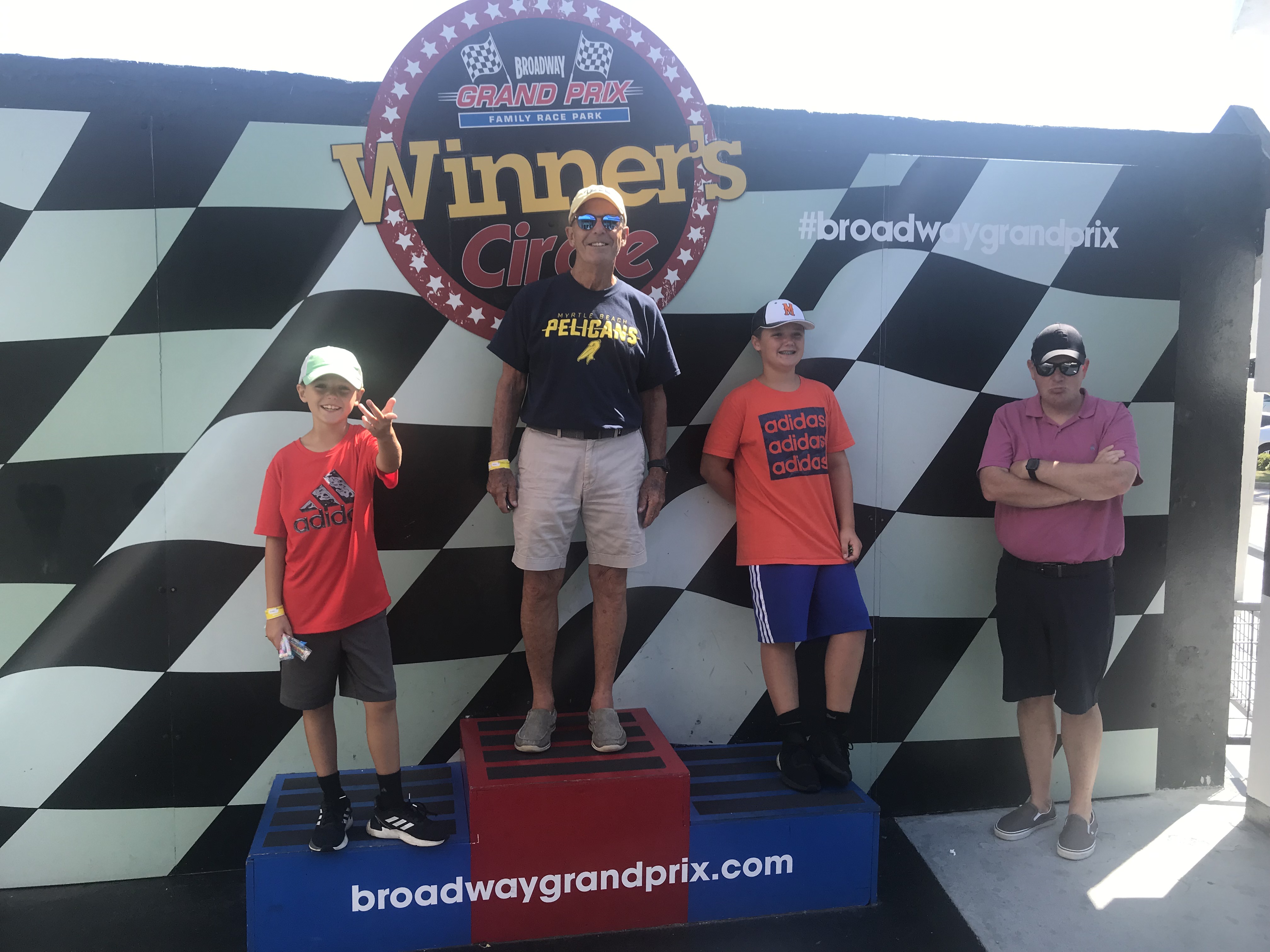 V is for…Victory. According to the boys, Bill was the overall victor of the weekend. He never stopped moving – you would’ve thought he was twenty years younger! We never seemed to agree on what the prize was, but to me it was the precious time spent together and the hope that it happens again soon!

W is for…Water Park. After our early breakfast on Friday morning, we headed to Myrtle Waves Water Park. Like I said, I was not too brave but delighted in watching Noah, Nathan and Bill jump form one ride to the next. Matt did not accompany us here as he had several work calls to complete, but we arrived early and were able to avoid the long lines that were present later in the day. 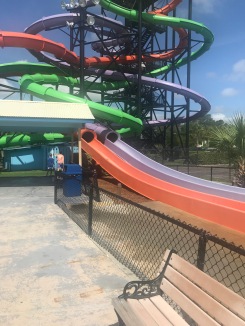 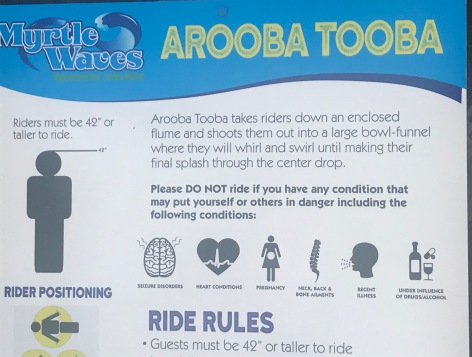 X is for…X-it. Although it saddened me to see them go, I had to take an exit shot at the airport! I think it’s safe to say, “A good time was had by all!”

Y is for…Young at Heart. I’ve hinted at this, but I was continuously amazed at Bill throughout the weekend. He behaved like a little kid – Water Park rides, Grand Prix races, Mini-golf – and the list goes on! It was wonderful!

Z is for…Zip Line. The boys’ final activity of the weekend was a Zip Line at Broadway at the Beach. Again, there was no fear as they zoomed across the surrounding water and zipped back with just as much energy! Of course they begged to do “one more thing” but Nicole and Matt had been clear – the zip would be the finale! 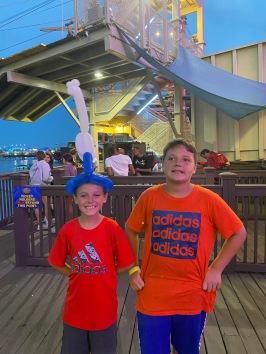 Although my alphabet approach is not chronological, it resulted in a very dynamic view of an absolutely wonderful weekend with Matt, Nicole, Nathan, and Noah. Without a doubt, one will always be able to find things to do in the Myrtle Beach area. We more than proved that!