Yesterday, when Bill said, “I think we should take a day off from the gym tomorrow,” I smiled and shared that “Sweeter words were never spoken!” Now, don’t get me wrong, I love to work out and Bill continues to be my inspiration, but when you average 6 days a week, a day of rest is irresistible!

Waking to another beautifully sunny, yet chilly, morning, we decided to go to brunch at a restaurant that had been recommended. Arriving at the Beaufort Grocery Company around 10:30, we were seated immediately and very quickly realized why this establishment receives excellent reviews. We opted for breakfast entrees, which were as tasty as they look, and I accompanied mine with a “BeauGro Bloody Mary” – complete with pickled okra – yum! 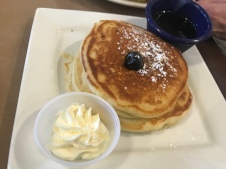 Needing to walk off our breakfast, we took a stroll along the waterfront and then found our way to the Beaufort Old Burying Grounds, a cemetery that dates back to 1731 and is located in the heart of town. We grabbed a self-tour brochure and proceeded to explore, focusing on the 28 individual stories shared in the flyer. 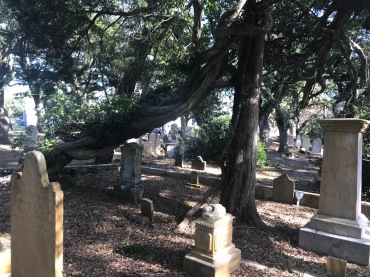 The cemetery was filled with magnanimous trees and grave sites of all kinds. Of particular interest were the vaulted graves that had apparently been bricked over in an attempt to protect them from high water. Inclusively, the graveyard honored soldiers, doctors, ministers, ship captains, women and children, each with a unique life story.

After discovering all 28 grave sites of interest, we wandered back to the waterfront via the rest of the Beaufort Historic Site, which includes a jail, apothecary, court house, several churches, and various homes of  original prominent Beaufort residents.

Bill and I didn’t really realize all of the history that this town shares, but we are enjoying discovering more and more!