We reconnected with our caravan partners on Tuesday, February 19 and left Mulege after spending 16 days on our own in the Baja. Our destination was Guerrero Negro, where we will spend two nights, the highlight being a whale watch tomorrow!

We drove about 180 miles including a steep trip up the “Hill from Hell” and arrived at the Malarrimo RV Park and Hotel around 2 p.m. Bill and I enjoyed a glass of “vino blanco” and a salad for me and a bowl of seafood soup for Bill – delicious broth teeming with crab, mussels, scallops, shrimp, fish and octopus! 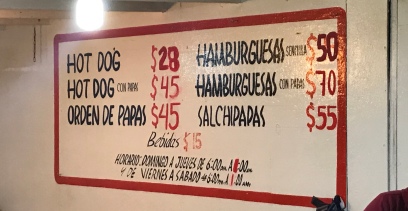 At several stops along this magnificent adventure, we had heard about the hot dog carts that light up only after dark and serve bacon-wrapped hot dogs along with a plethora of toppings. Well, tonight we were determined to find one such spot, so together with three other couples, we ventured downtown Guerrero Negro and hit the jackpot! 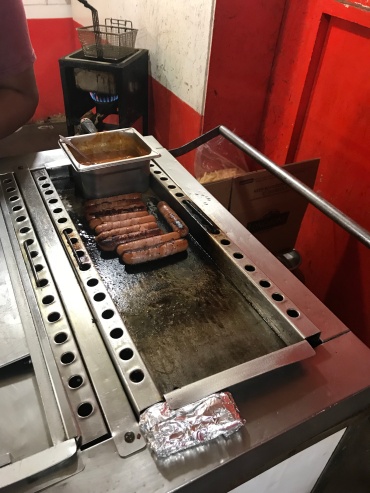 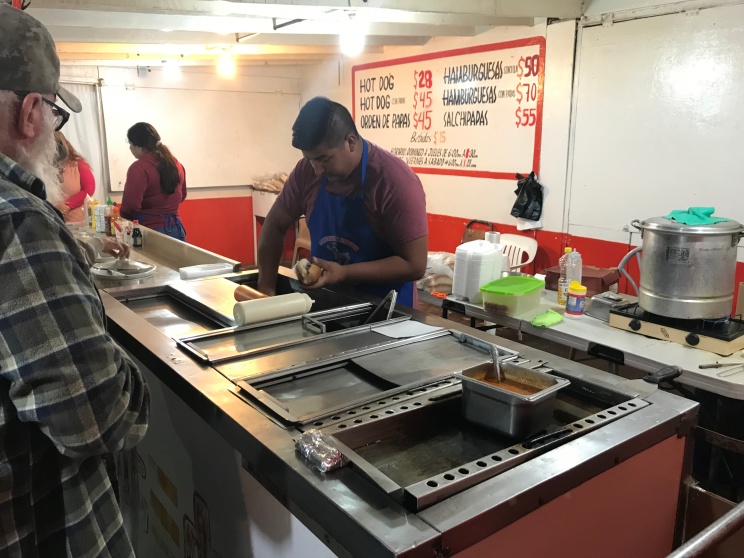 A nice young couple was manning the nocturnal hot dog stand, grilling the hot dogs and then offering whatever toppings we desired. Now, in the US, the most popular hot dog toppings include ketchup, mustard, relish, onions, sauerkraut and perhaps chili or cheese. Here, the list goes on – onions, tomatoes, beans, queso, black olives, dill pickles, guacamole, jalapenos, cottage cheese, mayo, pepper flakes, and more. And, as with all hot dog creations, the key to ultimate deliciousness is the roll – and it was! 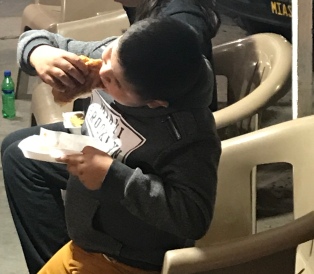 At the nocturnal hot dog stand that we visited, many local families joined us in hot dog delight – each dog costing 28 pesos or approximately $1.50. The stand is open every day but Sunday from 6 p.m. until 1 a.m.! What a great idea! Bill and I talked about how such a phenomenon would be a wonderful thing for the Jersey Shore in the summer. Who doesn’t need a loaded dog or two after a night of drinking and dancing at the beach?

As they say…when in Rome…well, in Guerrero Negro…we did and it was scrumptious!