One of the things that Bill and I always try to do when workamping in different locations is to escape for a day or two when we can – “get outta Dodge” – if you will. Well, this is my birthday week, so Bill took control of planning and off we went!

Now, I know many of my followers are not wondering where did they go? – but rather, who the heck is Bryan? Well, Bryan is not a who, but a where.  Bryan, Texas, is about two and a half hours northeast of San Antonio, and sits adjacent to College Station, home of Texas A&M and the Aggies! 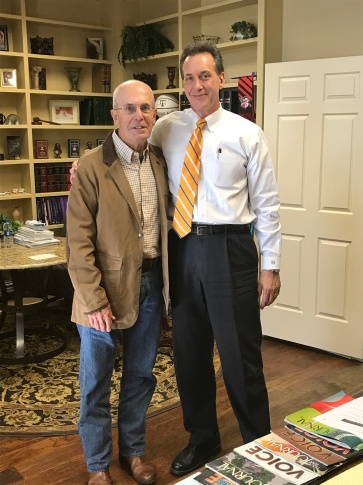 Our first stop was the law firm of Stephen Gustitus, a former football player of Bill’s when he coached at Susquehanna University. We shared a delicious lunch and I received another glimpse of Coach Bill Moll and the effect he had on many young men during his coaching career. Steve actually shared two notes that Bill had written to him in his senior year – I found it amazing that he had saved them and totally enjoyed being part of their reunion after almost 40 years! So…if you’re ever in Bryan and need a lawyer – or a really great friend, stop in to meet Steve!

After lunch, we found our way to the campus of Texas A&M, with the intent of visiting the George Bush Presidential Library, but lo and behold, due to this week’s government shutdown, the library and museum were closed! So…if you’re ever in Bryan/College Station, be sure to visit the George Bush Library Center!

Well, when your political plans fall through, the next best thing is always wine, so we

opted for Messina Hof Winery.  Started as an experiment 40 years ago on a one-acre lot, Messina Hof now produces 130,000 gallons of wine each year and has received acclaim and awards throughout Texas, with all of their grapes being grown in the state. The total Messina Hof Resort sits on the original site of an all-girls school and includes a tasting room, The Villa Bed and Breakfast, and The Vintage House Restaurant. We had just missed the last tour of the day, so we just tasted and enjoyed a glass of our favorite picks sitting in the sun on the patio. So…if you’re ever in Bryan, save ample time for sipping at Messina Hof! 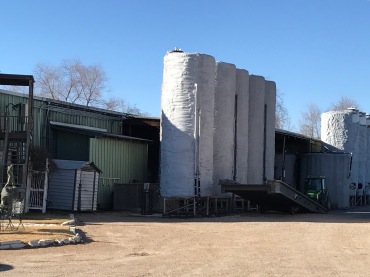 Have you ever imagined spending the night in a treehouse? Our next stop was check-in at Abigaile’s Treehouse, a bed and breakfast ranked as one of the best! Giving the impression of a treehouse, the house was originally the home of two architects, with the third floor wider than the second, which is wider than the first. That structure, coupled with the surrounding flora was originally called “Alice’s Wonderland.” When Lisa and Stan Ketchum purchased the house in 2008, they converted it into 4 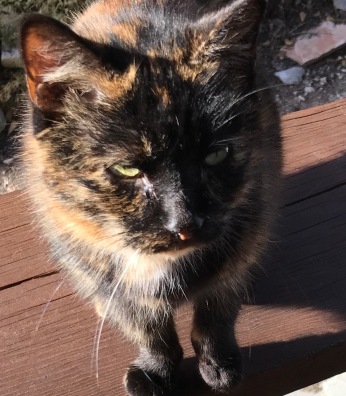 beautifully decorated suites and changed the name to Abigaile’s Treehouse, after their granddaughter. Well, you know I too have a granddaughter named Abigail, so where else would we stay? We were greeted with cheese and crackers and cookies and the following morning we delighted in an organic breakfast feast, all prepared by Lisa. Of course we also met the treehouse cat, Pumpkin, who befriends all guests and guards the fortress. The hope of the owners of Abigaile’s Treehouse  is that “all who enter as guests, leave as friends.” So…if you’re ever in Bryan, find peace and relaxation at Abigaile’s Treehouse! 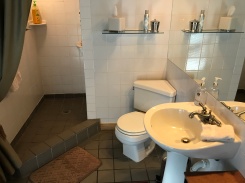 On the recommendation of our bed and breakfast hostess as well as Steve Gustitus, Bill

had made reservations for dinner at Christopher’s World Grille. Located in a 1913 ranch house, Christopher’s is the caterer for George and Barbara Bush when they are in town entertaining, or the couple has been known to just drop by for dinner. We had a remarkable birthday repast, including everything from my very dirty martini to our delicious entrees of redfish and filet, all the way to creme brulee – remember, presentation is everything! So…if you’re ever in Bryan, plan on dinner at Christopher’s! It will not disappoint!

Tuesday morning we luxuriated in our treehouse and then headed back to the Texas A&M campus to play a round of golf on The Campus Course. Renovated in 2013, the 7,008-yard course is situated right in the middle of the Texas A&M campus and provides a price structure favoring Aggie alumni, staff and students. We bit the bullet and played as outsiders – I won’t talk about my game, but it’s always fun to play new courses! So…if you’re ever in Bryan/College Station, play a round of golf and “Gig ’em” as the Aggies say!

I couldn’t have imagined a better birthday celebration…heartfelt thanks to Bill and Bryan!