Having been workamping now for seven years, we have met many other people doing the same thing and it’s always enlightening to learn of their experiences along with their attitudes toward the RV lifestyle! Some travelers return to the same locations and jobs every year, while others work only one season and return home for the other. The majority of workampers we have met are considered full-timers in that they have sold their home and live in their RV year round. The types of jobs vary as well, as everyone has different financial needs. Lots of workampers accept only volunteer positions, receiving no salary but getting their RV site in return for hours worked. Other people – a lot of times younger couples or those with no retirement benefits – search only for full time positions with a salary. There are so many combinations in the workamping world that almost everyone is able to find a situation that fits their needs.

I have enjoyed all of our workamping jobs – some more than others, however. I tend to be beckoned back to a spot where I have experienced a high comfort level. Bill, on the other hand, although feeling comfortable wherever we are, is influenced more by that spirit of adventure, that ability to see the country and experience a different situation each season! We met a couple while working at Thousand Lakes RV Park in Utah who shared that they had mutually decided not to return to any one location for more than two seasons. In that way they would force themselves to travel and explore. Although we spent four years at Sun-N-Fun in Sarasota and three summers at Wells Beach RV Resort in Maine, we have somewhat adopted the same theory. Any way you look at it, even though our “home” is in New Jersey, we actually have two other “homes” each year, depending on where we land and work!

Well, as Bon Jovi and Jennifer Nettles sing, “Who Says You Can’t Go Home,”  and that’s exactly what we did on Monday, February 6 following our Super Bowl adventure! Ah, but which “home” did we visit? We were in Texas, of course, for the Super Bowl so we thought how could we not drive three hours back to Travelers World RV Resort in San Antonio, which was our “home” last winter…so we did!

Monday morning we drove back to the Houston Airport via Uber and picked up a rental car. We arrived in San Antonio around 2p.m. and were greeted in the office by our managers, Brenda and Terry, along with our work colleagues from last winter. As people came in and out of the office, we were able to connect with many of them as well. Every Friday there is a happy hour at Travelers World, but they had decided to have one Monday night as well so we would be better able to see and talk with everyone. It was great to see our golfing buddies as well as others who had been friends and neighbors at the resort. We are Facebook friends with many of them but it is always wonderful to see people in person – hugs work much better that way!

Needing to eat after the gathering, Bill and I drove down to a section of the city known as Southtown to a favorite haunt – La Tuna. It is primarily an outdoor restaurant offering a wide variety of food selections. It had been a popular stop for dinner after golf on many occasions and it certainly did not disappoint.

Since we did not drive the motor home to Texas, we were staying in one of the resort’s brand new cabins, which was lovely and very comfortable. The next morning, Bill ventured out for coffee and stopped at a little Mexican bakery right down the street. Although the donuts did not go uneaten, we questioned the quality and later discovered that the bakery had changed hands. We then decided to take the bus down to the Riverwallk and explore while moving our bodies at the same time!

The Riverwalk was delightful because it was a weekday and it was not real crowded. The fact that it was predicted to be in the high 80’s also added to our pleasure!  We ended up having lunch at Casa Rio, which is a Mexican restaurant we had never tried. It is the oldest restaurant on the Riverwalk, having opened in 1946. Taco salad and a quesadilla was delicious and the sangria was refreshing! We also enjoyed the traveling troubadours and I couldn’t help but notice the gun sign – only in Texas! 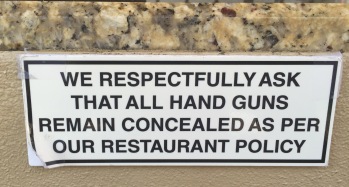 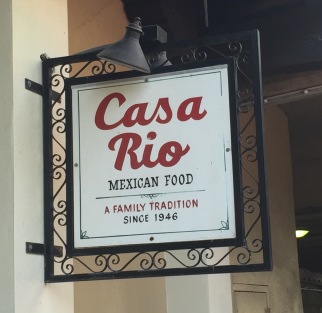 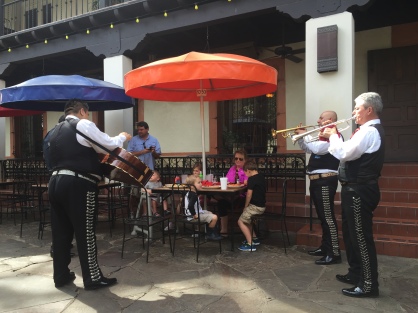 While working at Travelers World, we got very close with the managers, so had planned to go out to dinner with them so we could catch up. Does it sound like we were eating our way through San Antonio? Just wait! We dined at 54th Street Grill which was also one of our regular spots during our winter in San Antonio. We had a thoroughly enjoyable evening not only reminiscing about last winter but even talking about the future…there’s that comfort level again! 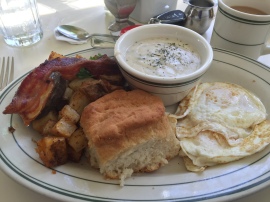 Our plane from Houston back to Atlanta was not leaving until 9p.m. on Wednesday, which gave us some time that morning to visit a few more favorite spots. Our first stop was the Guenther House for breakfast – yes more food, but delectable! As you can see they have the largest and most scrumptious cinnamon buns ever, but no, I did not have one – honest!

From there we drove up a tad north of the city to an area called Quarry Village. Not only is there the absolute coolest golf course – built into an old quarry, but there are also shops and restaurants which we frequented while there. Following that stop we headed to an area called The Pearl District, where there had been a lot of renovation and construction occurring last year. They have made a lot of progress in revitalizing this area that revolved around the Pearl Brewery. Now there are lofts and condos, lots of store, a weekly farmer’s market and the Emma Hotel, once a 19th-century brewhouse and now a magnificent hotel, truly the anchor of The Pearl District.

After returning to Travelers World to say goodbye, we headed back to Houston, giving ourselves plenty of time amid the traffic that Houston is famous for, and we did indeed confront some! Our flight back to Atlanta was uneventful and since we didn’t arrive till close to 1a.m. and still had a two-hour drive back to South Carolina, we stayed overnight at the Airport Sheraton – where our adventure had begun. What goes around comes around, as they say!

Now, a week later and having written about our escapades, I must repeat that Atlanta, Super Bowl and San Antonio truly was the ultimate adventure!