Weeks ago, Bill and I decided that we would treat ourselves to a Christmas getaway and visit  the Biltmore Estate in Asheville, North Carolina. Well, this was the week and we had a tremendous time! Our adventure began on Wednesday with a stop in Fair Play, SC at an out-of-the-way bakery named Hershbergers. We had heard about the donuts – a treat Bill and I have always enjoyed – so we thought we’d grab one – yes, only one each – and a cup of coffee, as we began our hour and a half journey north to Asheville. I must say, the recommendation we had received from fellow workampers did not disappoint and my only regret was that I didn’t get more than one! Feeling fortified and satisfied, we headed north.

We had decided to take the road less traveled, which took us through the Blue Ridge Mountains on very winding and narrow roads. Even though the day was cloudy, it was an amazing drive and well worth the extra time. We also spotted some promising hiking areas as well as several waterfalls yet to be discovered. Arriving at the Biltmore Estate, we went directly to Antler Hill Village, which is an area of unique stores and restaurants on the property. Have I mentioned that it was a very cold Wednesday, even in North Carolina, but we were prepared and explored the area. Our admission ticket included not only our evening Christmas tour of the Biltmore House, but also admitted us to Antler Hill Village and the Biltmore Winery. We decided to eat lunch at Cedric’s Tavern – Cedric being the Vanderbilt’s family dog! At lunch we “previewed” the Biltmore Merlot and enjoyed a cup of soup along with house-made pretzel rolls with “lusty monk mustard butter.” Perfect for a brisk day!

Following lunch we stopped into The Biltmore Legacy, a small venue that features a specific display that changes on a rotating basis. The current presentation focused on the weddings of the Vanderbilts, more precisely the wedding gowns worn by the brides. There was also a short clip of John F. Kennedy’s marriage to Jacqueline, as she and a Vanderbilt daughter-in-law were cousins and wore the same extravagant wedding veil.

Next stop was the Biltmore Estate Winery, which is a more current addition to the total estate. It is located in what used to be the Dairy Barn, which functioned as such until 1980. Not even realizing that wine was produced on the estate, we were anxious to sample the wine, and as I mentioned, we had tried the merlot at lunch based on a recommendation from our supervisor at Chickasaw Point. She shared that her husband had liked it so much he left with a case!

The tastings were complimentary, included 5 choices, and occurred at one of twenty – yes, twenty – tasting bars, each accommodating 12-14 tasters! We sampled two whites and three reds, all of which were very tasty. We didn’t leave with a case but we didn’t leave empty-handed either!

Following our wine tasting, we checked into our hotel and regrouped before returning to the Estate for our evening tour of the Biltmore House. 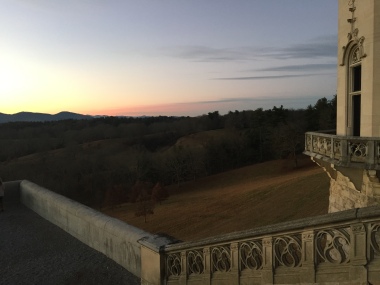 The sun was setting over the Blue Ridge Mountains as we arrived for our 5:45 tour. We had also pre-paid for an audio tour, which I would recommend for everyone, as the audio provides you with so much more detail as you walk from room to room. Speaking of those details, let me share a few of interest and compliment them, in most cases, with photos.

I could go on and on but that gives you an insight into what a magnificent structure the Biltmore House is, as well as what a wonderful home it proved to be for the Vanderbilt family…truly a very special place, especially during the holidays!